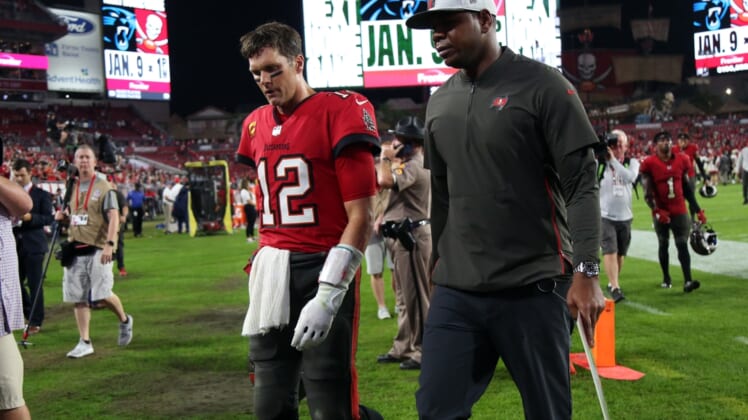 For the second time, the Jacksonville Jaguars are hoping Byron Leftwich is ready to be the face of their franchise.

Leftwich was among the coaches the Jaguars formally requested permission to interview for their vacancy at head coach, per multiple reports. Currently the offensive coordinator of the Tampa Bay Buccaneers, Leftwich has never been a head coach.

But he has experience leading the Jaguars as a quarterback.

A first-round pick out of Marshall, Leftwich was the No. 7 selection in 2003 and has been an assistant coach to Bruce Arians since 2017. He’s currently the offensive coordinator of the Tampa Bay Buccaneers.

Bucs defensive coordinator Todd Bowles also is reportedly a candidate for the opening in Jacksonville.

In nine seasons with the Jaguars, Leftwich had 10,532 yards with 58 touchdowns and 42 interceptions.

Urban Meyer was fired on Dec. 16, when Jacksonville promoted offensive coordinator Darrell Bevell to interim coach. Bevell reportedly is in consideration to remain as head coach after this season.

Bowles was previously head coach of the New York Jets and drew acclaim for his Super Bowl-winning game plan against Patrick Mahomes and the Kansas City Chiefs.

Pederson went to the playoffs three times in five seasons with the Eagles, including a Super Bowl win, posting a 42-37 overall record.