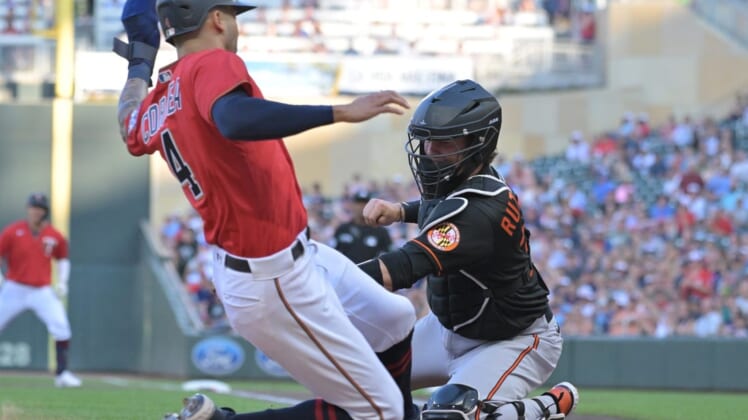 Byron Buxton hit a walk-off, two-run home run in the bottom of the ninth inning to lift the Minnesota Twins to a 3-2 win over the Baltimore Orioles on Friday night in Minneapolis.

The Twins trailed 2-1 entering the ninth when Luis Arraez reached on a single. Moments later, Buxton belted a 399-foot shot over the wall in left field to end the game.

It was the team-leading 21st home run for Buxton, adding to his career high in only his 60th game of the season. Minnesota snapped a two-game skid suffered in consecutive walk-off defeats.

Cedric Mullins and Jorge Mateo had one RBI apiece for Baltimore, which lost its third straight.

Twins right-hander Juan Minaya (1-0) earned the victory with 1 1/3 scoreless innings of relief. Minaya was one of two Minnesota pitchers to follow starter Joe Ryan, who gave up one run on two hits in seven innings. He struck out seven and walked one.

Orioles right-hander Jorge Lopez (3-4), who entered the game with an 0.73 ERA, gave up two runs on two hits without recording an out in blowing his third save this season. He spoiled a dominant performance by Baltimore pitchers Spenser Watkins (six innings), Cionel Perez and Felix Bautista, who combined to allow only one run on three hits (all by Watkins) in eight innings.

The Twins opened the scoring in the bottom of the first inning. Arraez hit a leadoff double to deep right-center field and eventually scored on Jose Miranda’s single to left.

Carlos Correa also tried to score from second base on Miranda’s hit, but he was thrown out at the plate. Orioles left fielder Ryan McKenna scooped up the ball and fired a throw on one hop to catcher Adley Rutschman, who made the tag just before Correa slid across the plate.

Baltimore evened the score at 1-1 in the top of the third. Mullins doubled to deep right field to drive in Mateo, who had reached base by drawing a two-out walk.

The score remained deadlocked as both starting pitchers dominated.

In the eighth, with Ryan finally out of the game, Baltimore took a 2-1 lead. McKenna hit a leadoff double to left off Caleb Thielbar, advanced to third on a groundout by Trey Mancini and scored on a fielder’s choice by Mateo.