Butler pulls away from depleted Georgetown 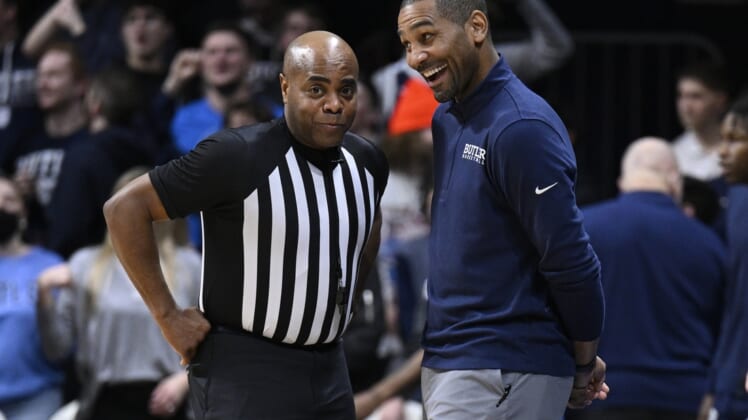 Jair Bolden hit five 3-pointers on his way to 23 points as visiting Butler rolled to a 72-58 Big East win over Georgetown Thursday night in Washington.

With coach Patrick Ewing in COVID-19 protocol, Georgetown (6-7, 0-2) was guided by assistant Louis Orr, formerly a head coach at Siena, Seton Hall and Bowling Green. Georgetown also was without backcourt starters Dante Harris and Donald Carey, who also were sidelined by illness.

It was the Hoyas’ third straight loss and just their second game in a span of 26 days. During the period, they’ve had to postpone four games because of players sidelined by COVID.

Tyler Beard had 15 points and five assists to lead the Hoyas. But Butler clamped down on Georgetown’s top scorer Aminu Mohammed, who hit just 2 of 16 shots, scoring seven points.

Timothy Ighoefe, who returned from a broken hand which sidelined him for more than six weeks, had four points and a game-high nine rebounds.

Butler took control of the game with a 13-0 run that bridged the halves. It was tied at 27-all late in the first half when Georgetown went cold. During a 6:06 span, the Hoyas missed seven shots and committed two turnovers.

Bo Hodges, who missed the Bulldogs’ first 14 games with a knee injury, got his first field goal of the season to trigger the spree. Nze added four points and Golden made a corner 3 to culminate the run, which gave Butler a 40-27 advantage.

Later in the second half, Butler used a 10-2 run featuring Bolden’s and Nze’s 3-pointers to stretch its advantage to 53-33, which was their largest of the night.

Down the stretch, Georgetown occasionally rattled Butler with full-court pressure. But after trailing by 20, the Hoyas never got the deficit back into single digits.