Jimmy Butler scored a 35-point triple-double and the Miami Heat defeated the Los Angeles Lakers 111-108 on Friday to stave off elimination and force an NBA Finals Game Six on Sunday. 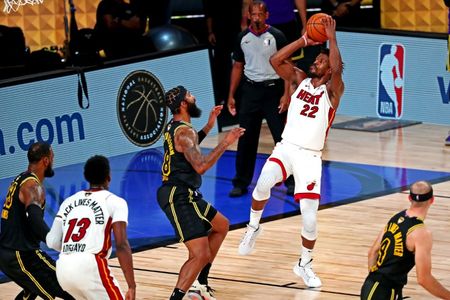 (Reuters) – Jimmy Butler scored a 35-point triple-double and the Miami Heat defeated the Los Angeles Lakers 111-108 on Friday to stave off elimination and force an NBA Finals Game Six on Sunday.

With their backs against the wall, the Heat refused to give up, surviving a 40-point onslaught from the Lakers LeBron James thanks to outstanding three-point shooting, clutch free throws and the all-round brilliance of Butler.

The Lakers, who trailed for most of the game, had a chance to win it in the final seconds, but Danny Green’s wide open three-point shot came up short. The Lakers Markieff Morris got the rebound but threw the ball out of bounds while trying to pass it to Anthony Davis.

Rookie Tyler Herro was fouled on the ensuing inbound pass and coolly sank two free throws to extend the Heat lead to three points and the Lakers were unable to get off a good shot as time expired to cap the thrilling contest.

Butler, who had 12 rebounds, 11 assists and was 12-12 from the free throw line, said the win was a gritty team effort.

“We just played hard, got to where we wanted to on offense, shared the ball like we always do, and just kept with it,” he said.

“It’s a game of runs and we withstood theirs.”

Still, he said he was not pleased with how the Heat closed the game out.

“It was a little bit of luck that Danny Green missed that shot at the top of the key,” he said.

“Now we go back to the hotel to get better because the way we ended this game is not going to get it done in the next one.”

“Duncan is Duncan. Those are the games we expect him to have,” Butler said.

“He’s the reason we’re going to win the next one.”

The favored Lakers, whose lead is now 3-2 in the best-of-seven series, saw forward Anthony Davis re-aggravate a right heel injury late in the first quarter.

Davis returned after sitting out for several minutes, but struggled to find a rhythm and could be seen hobbling up the floor in the fourth quarter.

The Heat are hoping to spoil the favored Lakers attempt to win a record-tying 17th title in Orlando, where the NBA resumed its season in a biosecure bubble in July after a four-month hiatus over the COVID-19 pandemic.