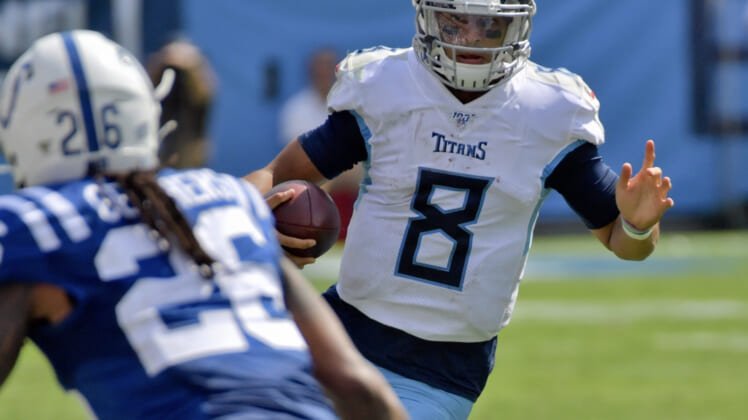 The Tennessee Titans and Jacksonville Jaguars both find themselves at a crossroads heading into this big “Thursday Night Football” matchup.

Tennessee is coming off a disappointing loss to the Indianapolis Colts after taking out the Cleveland Browns in Week 1. Is Marcus Mariota ready to prove himself after failing at every turn over the past two-plus seasons?

On the other hand, things have already gotten ugly in Duval. Star cornerback Jalen Ramsey got into it with head coach Doug Marrone during Sunday’s loss to the Texans. He’s since requested a trade. At 0-2 on the season, Jacksonville is seemingly on the brink.

It’s in this that we look at some burning questions for this all-AFC South matchup on Thursday night.

We’ve read the rumors. Ramsey himself has taken to the media. The two-time Pro Bowler wants out of Jacksonville. Hours before kickoff in Duval, that’s yet to come to fruition. We’re intrigued to see if Ramsey will actually be active in this game. It’s hard for a head coach and star player to turn the page from the drama we saw unfold last weekend. Ramsey doesn’t appear to be ready to do that.

Should Ramsey play, it will be interesting to see both his body language and how the star interacts with his soon-to-be former teammates. The backdrop here is also real in that Ramsey named the Titans as one of the two teams he’d like to suit up for prior to requesting a trade. Get your popcorn ready, ladies and germs.

Is Marcus Mariota ever going to prove himself?

Mariota seems like a nice enough guy. He’s a fan favorite in Nashville. That’s more than understandable. But the reality of the situation tells us something different. Mariota has not proven himself to be even a top-20 quarterback since the start of the 2017 season. The stats don’t lie in this regard.

Over the course of his past 30 starts, Mariota has thrown 28 touchdowns compared to 23 interceptions. While has four scores and zero picks this season, the former No. 2 overall pick is averaging just 200 passing yards per game. That’s about what we’ve seen from him over the past two-plus seasons in general. Is Mariota ready to elevate his game after a somewhat promising start to the campaign? We’ll find out Thursday night.

Is Doug Marrone on the hot seat?

Some are simply going to blame Ramsey for the recent drama in Jacksonville and not look back. That would be foolish. When Marrone took over as the interim head coach back in 2016, he attempted to instill a winning culture. It got off to a tremendous initial stanza with a 10-4 start to the 2017 campaign and an appearance in the AFC Championship Game.

It’s been completely downhill since. Jacksonville has lost 15 of its past 20 regular-season games. Marrone himself has made some ridiculous in-game mistakes, including going for two late in last week’s loss to the Texans. Some will give him a pass when it comes to the Ramsey situation. But a team this talented losing 75 percent of its past 20 regular-season games is not acceptable. Will Marrone’s hold on the Jaguars’ job be even more tenuous after Thursday night?

Will the Titans get Derrick Henry more involved?

Through the first two games of the season, this former Heisman winner has put up 252 yards and is averaging a whopping 6.8 yards per touch. That included an extraordinary 75-yard touchdown catch against the Browns in Week 1.

At issue here is Tennessee’s inconsistency when it comes to using Henry. Despite being in a close contest with Houston last week, Henry touched the ball a total of 15 times on the ground. For comparison’s sake, Mariota dropped back to pass the ball 35 times. We don’t get the philosophy from offensive coordinator Arthur Smith. Will this change come Thursday night? Tennessee better hope so.