Burning questions for Texans vs. Colts on ‘Thursday Night Football’ 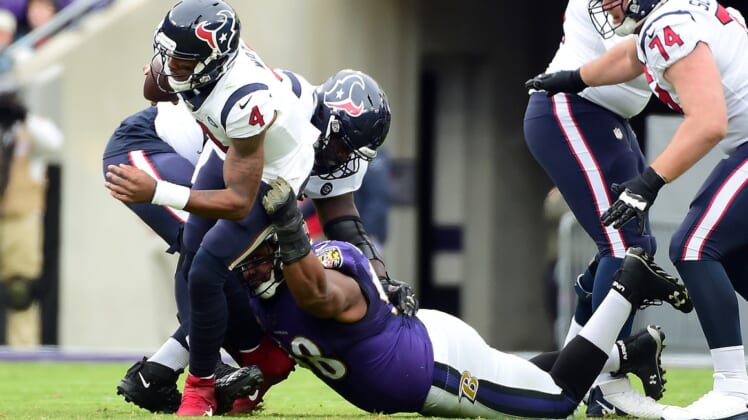 A battle is brewing in Texas. It might not be the Alamo, but it’s going to be pretty darn fierce come Thursday evening.

The Indianapolis Colts will head to Houston to take on the Texans on “Thursday Night Football” in a matchup that will dictate who heads into Week 13 in first place in the AFC South.

Houston is coming off a blowout loss to the Baltimore Ravens while Indy disposed of the Jacksonville Jaguars in similar fashion to pull even in the division.

It’s in this that we take a look at five burning questions for a huge matchup to get Week 12 around the NFL started.

Can the Texans protect Deshaun Watson?

Some of this has to do with Watson’s inability to get rid of the ball in a timely manner. Even then, Houston’s revamped offensive line let the franchise quarterback down in a big way last week.

Watson was sacked a resounding six times by a fierce Ravens defense. The third-year quarterback has now been taken down 32 times in 10 games and has been hit a total of 62 times.

There is some good news on this front. Indianapolis ranks in the middle of the pack with 25 sacks as a team. Having recorded nearly a third of those sacks, the Texans are going to have to account for stud edge rusher Justin Houston.

Who will step up at running back for the Colts?

Now that starting running back and leading rusher Marlon Mack is going to be sidelined for multiples of weeks with a fractured right hand, another player at this position must step up for Indianapolis.

Mack has accounted for 61% of the Colts’ rushing yards on an offense that ranks a surprising No. 4 in the NFL in that category. The next two leading rushers on the team, Nyheim Hines and Jordan Wilkins, have combined for less than 300 yards.

Set to take on a Texans defense that has yielded 4.7 yards per rush on the season, one of these two players must step up in order to provide Jacoby Brissett with the balance he needs on offense.

Can the Texans find a pass rush?

Houston has struggled big time without J.J. Watt and Jadeveon Clowney in the mix. Its defense heads into Week 12 ranked 26th in the NFL with just 22 sacks in 10 games.

On the other hand, Colts quarterbacks have gone down just 20 times this season. If Brissett has time to pass the ball, injuries in the Colts’ backfield will mean very little in this one.

That’s where linebackers Whitney Mercilus and Brennan Scarlett must step up. They have combined for 10 of the Texans’ 22 sacks this season.

We’ll give Brissett credit for standing in there for Andrew Luck, who abruptly retired during the preseason. He’s been given the keys to the kingdom and has not looked back. The fourth-year signal caller has tossed 15 touchdowns compared to four interceptions in nine games.

At issue here are struggles on the road. Brissett is throwing for an average of just 136.5 yards in four dates away from Indianapolis.

Needless to say, he needs to step it up with Marlon Mack sidelined. The good news here is that Brissett is going up against a makeshift Texans secondary that’s yielded the fourth-most passing yards to go with 22 touchdowns and just five interceptions this season.

Can we avoid another ugly scene?

Divisional games at this point in the season get testy. That’s magnified when both teams are coming off a short week. We saw this first-hand in last Thursday’s game between the Browns and Steelers. It was among the ugliest moments the NFL world has seen in some time.

While not as heated of a rivalry as that AFC North clash, we’re talking about two teams battling for first place heading into Thanksgiving weekend. The hope here is that things don’t turn ugly in Houston.