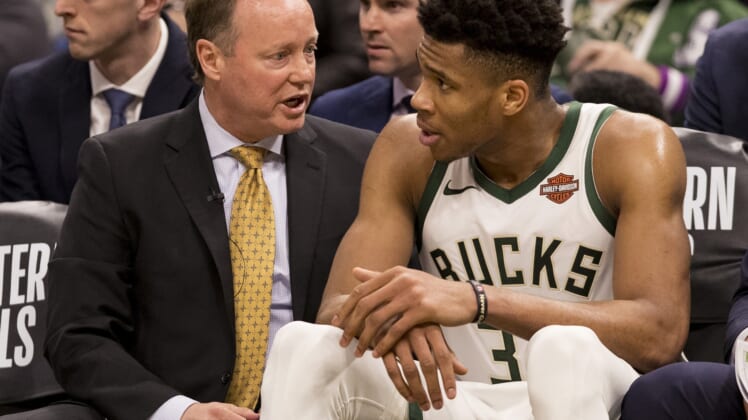 The Toronto Raptors are on the road once again Thursday night for a pivotal Game 5 against the Milwaukee Bucks in the Eastern Conference Finals.

The big picture: When the Bucks left home for a two-game stint in Toronto, they led 2-0 and appeared to have this series well in hand. The Raptors saved their postseason with a double-overtime thriller in Game 3 and then blew out their opponent in Game 4.

Thursday night’s Game 5 is essentially the first of a three-game series, which at this point is anyone’s to win.

Here’s a look at some key questions heading into this hugely important contest.

Will Milwaukee’s guards show up?

Eric Bledsoe and Malcolm Brogdon have to be factors in Game 5 if the Bucks are going to get back to playing with confidence on both ends of the court. The two guards were liabilities on Tuesday night in Toronto, going a combined 4-17 from the floor for just nine points.

As a result, only three Bucks players managed double-digit points in that game. Milwaukee’s trademark depth failed to register for the first time all series.

Will Kawhi’s knee continue to be a problem?

Ever since Leonard came down awkwardly on his knee early in the first quarter of Game 3, he’s been clearly laboring. Thankfully he got a ton of help from his teammates in Game 4 and only had to play 34 minutes — by far the fewest of any game in this series.

Chances are, however, that a trip back to Milwaukee will necessitate more minutes for The Klaw. That could be problematic if his knee continues to give him trouble going forward. Sure, he’s been tremendous the past two games despite playing through pain. Yet with two of three games on the road, Toronto needs its superstar at full strength.

Will the Greek Freak finally play like the MVP?

If the Bucks are going to reclaim the momentum in this series in Game 5, then Giannis Antetokounmpo needs to reclaim his mojo.

The 24-year-old star has failed to consistently have an attacking mindset the past two games, and the results speak for themselves. He’s made just 14-33 shots from the field, with far too many of those coming from the perimeter.

Kawhi Leonard and Toronto’s big men have converged on Giannis in the paint every time he goes inside. Yet a tentative approach in response has resulted in an offensive gameplan that looks nothing like what made the Greek Freak such a potent offensive force all season long.

Will Toronto’s bench be able to keep the momentum going?

Until Game 4, Toronto’s bench had been vastly outplayed by Milwaukee’s second unit — especially in the first two games of the series. That all changed in the blowout win on Tuesday, as Nick Nurse got a huge game out of his reserves.

Norman Powell had 18 points. Serge Ibaka scored 17 points and grabbed 13 rebounds. Fred VanVleet added 13 points. It was these big performances that allowed Leonard to rest easy on the bench, and allowed the Raptors to win in a blowout despite their star scoring just 19 points.

Keeping this positive momentum going in Game 5 would give Toronto a realistic chance to pull ahead with their first road win and a 3-2 lead.