Burning questions for Dolphins vs Steelers on ‘Monday Night Football’ 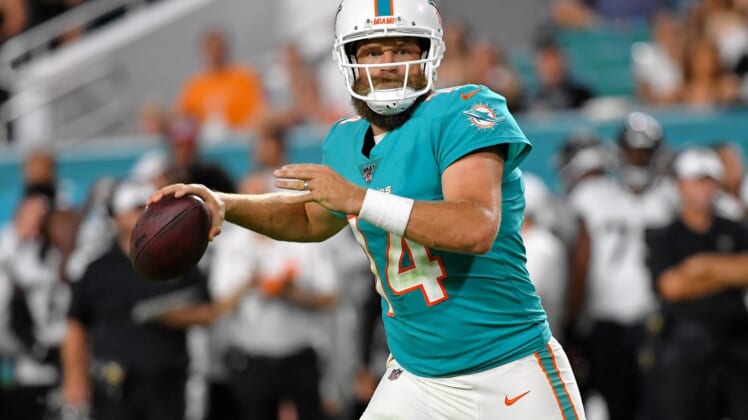 The Miami Dolphins (0-6) are visiting the Pittsburgh Steelers (2-4) to close out NFL Week 8 on Monday Night Football.

Fans should brace for an ugly game, because that’s been pretty much a weekly occurrence whenever the Dolphins take the field. The Steelers are getting Mason Rudolph back this week, which should bolster the offense and give them a better chance to win.

Despite the Steelers being favored by two touchdowns, we still have some burning questions ahead of this Monday Night Football game.

Can Miami slow down James Conner?

From a fantasy perspective, James Conner is a must-start player this week, even more so than usual. Miami’s defense ranks third-worst in the league defending against running backs for fantasy purposes, and for real-world purposes it’s no better. (second-worst, allowing over 160 yards per game).

The best part of Conner’s game is that he’s multi-dimensional, too. He’s even more dangerous as a receiver out of the backfield, and Miami’s linebackers are not great defending in the open field.

So, the logical answer to the question is that, no, the Dolphins can’t slow down James Conner. But shocking results occur every week around the NFL. If they do slow him down, then just maybe the Dolphins have a shot at pulling off an upset.

Will Mason Rudolph be rusty?

The last time we saw Mason Rudolph on the gridiron, he was being helped off the field after being knocked unconscious on a helmet-to-helmet hit from Earl Thomas. Now out of the league’s concussion protocol, Rudolph will be back under center for the Steelers.

Before his injury, Rudolph was having a very good season, all things considered, with a 67% completion rate, 646 yards, seven touchdowns and just two interceptions. Hopefully for Pittsburgh’s sake, the second-year quarterback doesn’t experience some rust early on and gives the Dolphins momentum by turning the ball over.

The Steelers can bring pressure inside and off the edge. Likely, Ryan Fitzpatrick is going to be scrambling for his life most of the night. Unless the Dolphins can do better up front, Miami’s offense is likely going to be on life support on Monday Night Football.

Will Minkah get his revenge?

The Miami front office granted Minkah Fitzpatrick his wish to be traded a few weeks ago, and since he arrived in Pittsburgh he’s been outstanding. The former first-round pick out of Alabama was frustrated by how the Dolphins utilized his talent, and he had every right to be.

Now Fitzpatrick has a chance to rub all this in Miami’s face in a prime-time game. We’d be shocked if he didn’t have the best game of his season Monday night.

The Dolphins are 0-6 this season, and throughout his career Ryan Fitzpatrick is 0-6 in games started against the Steelers. The grizzled veteran absolutely has an uphill climb if he’s going to break out of these streaks.

Miami’s offensive line is atrocious. Pittsburgh’s defensive front is among the most dangerous the NFL has to offer. The Dolphins are also going to be without Kenyan Drake, who is not traveling to Pittsburgh ahead of the NFL trade deadline.

Needless to say, if the FitzMagic comes alive on Monday Night Football, it would arguably mark the most incredible moment of Fitzpatrick’s long career.