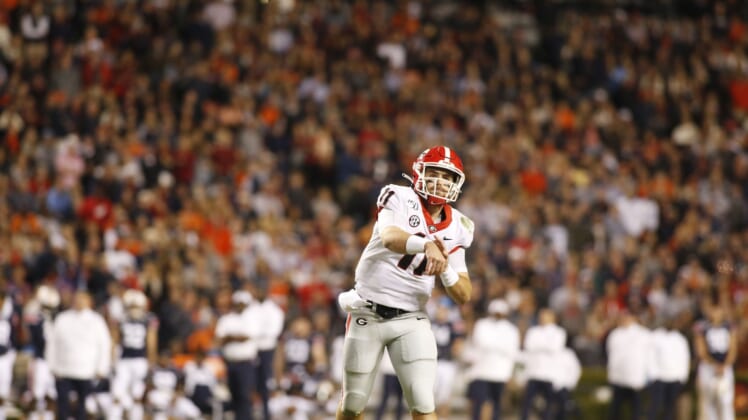 The past month of the 2019 college football season has delivered plenty of upsets to shake up the College Football Playoff rankings. Now with the arrival of Week 13, we hope for even more exciting action.

There is no bigger game on Saturday than No. 8 Penn State’s clash with No. 2 Ohio State. It will determine a spot in the CFB Playoff and it’s the perfect way to kick off Saturday’s slate.

Of course, Week 13 also offers intriguing tests for teams looking to rebound after tough losses and a few contenders to fix issues before the regular season ends.

There are plenty of entertaining matchups in Week 13 for fans to enjoy. Now let’s examine the burning questions that will play a key role in Saturday’s biggest games.

Penn State’s defense entered November as one of the best units in the country. The reputation no longer holds after allowing 58 points in its last two games. If the Nittany Lions want to keep their CFB Playoff hopes alive, the defense must find a way to stop Ohio State’s explosive offense.

The Nittany Lions must put pressure on Fields to have any shot at stopping this offense. If he’s given time to throw, he’ll do even more damage than Minnesota Gophers quarterback Tanner Morgan did. Penn State needs defensive ends Yetur Gross-Matos and Shaka Toney, who enter with 6.5 sacks each this year, to hit Fields early and often. If they aren’t successful, Fields will rip this defense to shreds.

West Virginia rode a six-game losing streak into Manhattan without much confidence and a defense no one trusted. The Mountaineers surprised everyone by knocking off No. 24 Kansas State behind a remarkable defensive effort that saw the Jayhawks’ offense turn it over twice and score only 20 points.

A similar performance in Week 13 could propel West Virginia to another top-25 upset. Of course, stopping Oklahoma State running back Chuba Hubbard is an overwhelming task. The sophomore leads the FBS in rushing yards (1,726) and WVU’s defense enters with 1,671 rushing yards allowed this season. If the Mountaineers have any chance of winning, they must contain Hubbard and put the game on backup quarterback Dru Brown’s arm.

Can Gophers’ offense rediscover its stride against Northwestern?

Minnesota saw its dreams of an undefeated season and a CFB Playoff berth end in Week 11. The Gophers’ offense underwhelmed against Iowa’s defense. Now it needs to take advantage of a rebound opportunity against Northwestern.

The Wildcats allow 23.5 points and 344.5 total yards per game this year, numbers that are deceiving given some of the weak competition faced. Minnesota boasts one of the best receiving corps in the nation, so there will be chances to burn Northwestern’s secondary. If the Gophers’ offense can hit its stride in Week 13, they can return home with confidence and a 10-1 record with Wisconsin’s defense on deck.

Does No. 14 Baylor rebound and get its revenge on Texas?

Baylor saw its perfect season sitting on the doorstep with a 31-10 lead against Oklahoma at halftime in Week 11. It all came crashing down as Jalen Hurts decimated the program’s hopes in the second half. Now, Saturday gives Baylor a chance to rebound epically against Texas.

The Longhorns arrive for the rivalry game with a four-game winning streak in the series. This year, though, the Bears look like the superior team. If the offense we saw in the first two quarters against Oklahoma shows up, Baylor will roll to a double-digit victory. However, this offense can be inconsistent and it will be this team’s downfall if it can’t take advantage of the Longhorns’ defense.

Can Jake Fromm correct his accuracy woes before the postseason?

Georgia’s offense is beginning to hit its stride and it will be playing with confidence after securing a spot in the SEC Championship. If the Bulldogs want to prove they can compete with LSU, then Fromm must correct his troubling issues with accuracy.

The junior enters with an 8-0 TD-INT ratio in his past three games. However, he also completed fewer than 47 percent of his passes and finished under 200 passing yards in consecutive games. Texas A&M’s secondary has allowed the 17th-lowest completion rate (55.16 percent) in the FBS. Georgia should roll to victory, but this is a great litmus test for Fromm’s play and can indicate if he can correct his woes.

Navy is coming off a horrific loss to Notre Dame that saw the Fighting Irish light up the scoreboard with 52 points, five passing touchdowns and 305 passing yards on 22 attempts. Now the Midshipmen must face a Mustangs’ offense that ranks seventh in the FBS in passing yards per game (328.1) and sixth in points per game (45.1).

We know Navy’s triple-option offense can put up plenty of points, but it could be in danger of the same problem it experienced against Notre Dame. If the Midshipmen can’t put up points early and SMU quarterback Shane Buechele is given time to fire rockets deep past Navy’s secondary, the game will be over by halftime. It’s time for Navy’s defense to step up with a winning effort and help out the offense.