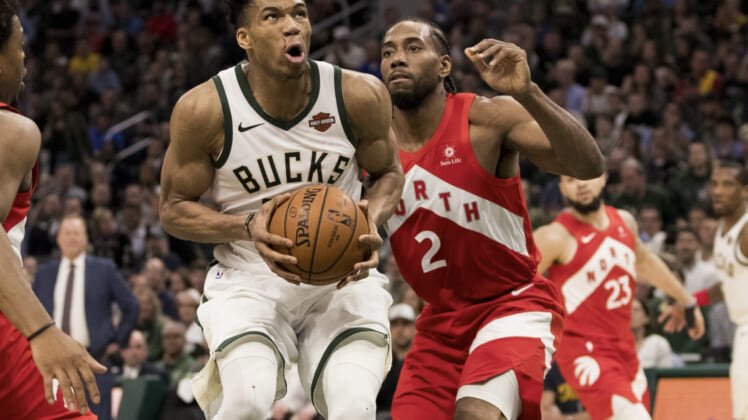 The Toronto Raptors and Milwaukee Bucks will duke it out in a huge Eastern Conference Finals game Saturday night.

The big picture: The Toronto Raptors have an opportunity to clinch their first ever trip to the NBA Finals in Game 6 of the Eastern Conference Finals Saturday evening.

On the other side, the Milwaukee Bucks will travel to Toronto in hopes of ending a three-game losing streak and sending this one back to Wisconsin for Game 7.

This question is two fold. We’re openly wondering if Gannis’ ankle is good after he tweaked it late in Game 5. It forced the MVP candidate to sit out for a couple plays before returning to the action. Though, there’s some who think Antetokounmpo was more winded than anything else.

In no way does this excuse the lackluster performance we’ve seen from the Greek Freak over the past three games. He’s turned it over a total of 14 times during that span and is averaging only 17 shots per outing. Antetokounmpo needs to be more aggressive in Game 6. It’s going to be key to the Bucks’ success.

Toronto posted the third-best home record during the regular season at 32-9. It has gone 7-2 in nine dates at Scotiobank thus far in the playoffs. That included a season-saving double-overtime win back in Game 3.

It’s paramount that Nick Nurse’s squad takes advantage of the home crowd come Saturday night. The entire nation of Canada will be watching to see if this franchise can earn its first ever NBA Finals trip. That’s a whole lot of pressure on a team that had in the past cracked under similar circumstances.

Will Bucks’ new lineup continue to be a boon?

We really like what Bucks head coach Mike Budenholzer did Thursday night. It might not have been enough to overcome late-game struggles, but the combination of Malcolm Brogdon and Eric Bledsoe performed well after the former was inserted into the lineup for Nikola Mirotic.

We’re highly intrigued to see how this works out in Game 6. Brogdon and Bledsoe combined for 38 points, 15 rebounds and eight assists the last time around. Mirotic failed to score in 11 minutes of action off the bench. Milwaukee will need him to perform well off the bench in Game 6.

Can the Raptors get more from the bigs?

After putting up tremendous Game 4 outings, both Serge Ibaka and Marc Gasol struggled Thursday night. The two combined for just 10 points and 12 rebounds in the win. They were pretty much saved by the performance of Fred VanVleet off the bench.

There’s no telling if VanVleet will be the same dominating outside presence as we saw in Game 5. If that’s not the case, Toronto must get more production from its bigs.

Will Kawhi dominate, close this one out?

There’s absolutely no reason to believe Kawhi Leonard can’t continue his dominating recent run, leading Toronto to the NBA Finals in the process. Hobbled by a leg injury in Game 5, Leonard tallied 35 points, seven boards and nine assists. He hit huge shot after huge shot in the fourth quarter.

The question here isn’t as much about Leonard. He’s dropped 30-plus points in nine of the past 12 games. Instead, it’s about the Bucks making Toronto’s best player work more from it. If Leonard is as efficient in Game 6 as we’ve seen throughout the series, it’s not going back to Milwaukee Monday.