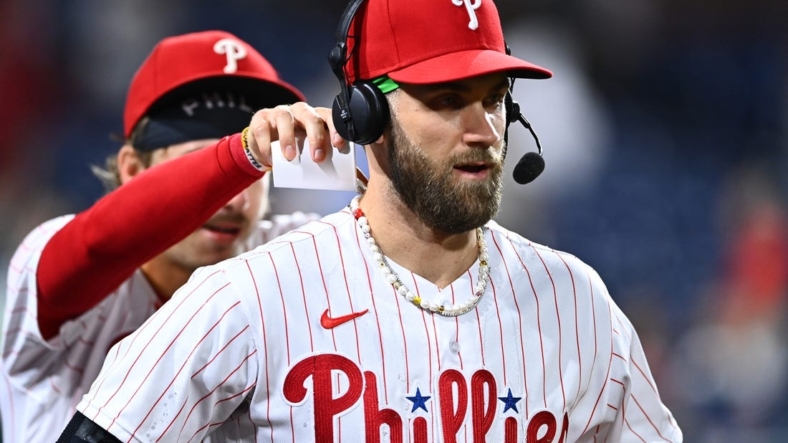 The Phillies went 31-20 without the defending National League Most Valuable Player. Now they’ll look to improve to 2-0 with Harper back in the lineup when they host the Pittsburgh Pirates again on Saturday evening.

Harper came off the injured list on Friday and sparked the Phillies with a two-run single in a 7-4 victory.

“The team has been playing great,” Harper said in a postgame interview on NBC10 Philadelphia. “They picked up where I left them. Now I’m going to do what I can to help each night.”

That’s a bit of an understatement.

The Phillies finished the night 2 1/2 games ahead of the San Diego Padres for the second NL wild-card spot and five games in front of the Milwaukee Brewers in the chase for the last berth.

“If we can get it going in September, we’re going to be very scary,” Harper said.

“There’s not really a soft out in our lineup right now,” interim manager Rob Thomson said.

The Phillies will hand the ball to Kyle Gibson (8-5, 4.30 ERA) on Saturday. The right-hander struggled a bit in his latest start, against the New York Mets on Sunday, when he tossed 4 1/3 innings and allowed eight hits and four runs, two earned.

The reeling Pirates will hope to avoid a seventh consecutive loss on Saturday.

Unlike their previous game, a 14-2 defeat to the Atlanta Braves on Wednesday, the Pirates showed more competitive spirit in the opener against the Phillies.

After falling behind 6-0 in the second inning, the Pirates battled back behind home runs from Bryan Reynolds, Rodolfo Castro and Ben Gamel.

Zach Thompson was solid out of the Pittsburgh bullpen, allowing four hits and two runs, one earned, in five innings.

In the end, it wasn’t enough for the Pirates, who committed two costly errors.

“We didn’t play great defensively and put ourselves in a hole,” Pirates manager Derek Shelton said. “Against a club like this, we cannot give away extra outs.”

Right-hander Tyler Beede (1-3, 4.13 ERA) is scheduled to start for the Pirates on Saturday. In Beede’s most recent start, against the Cincinnati Reds on Aug. 20, he gave up six hits and five runs, four earned, in four innings.

“He just missed in the middle of the plate,” Shelton after that game.

Beede is 0-2 with an 7.50 ERA in four games since being moved from the bullpen to the rotation. He is 0-1 with a 6.23 ERA in three career games (two starts) against the Phillies, having held them scoreless for three innings in relief on July 31.