Bulls seize lead in second half, knock off Cavaliers 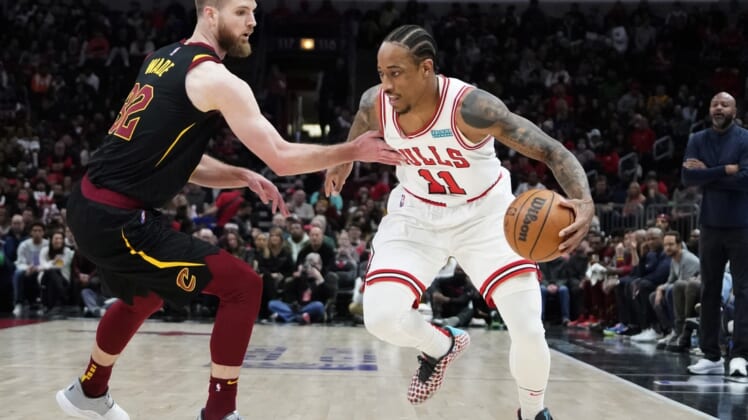 All-Star DeMar DeRozan had a team-high 25 points and Nikola Vucevic added 20 points and 14 rebounds to propel the Chicago Bulls to a 101-91 triumph over the visiting Cleveland Cavaliers.

Ayo Dosunmu contributed 17 points for the Bulls (41-26), who had lost five of their last six games.

Guard Darius Garland paced the Cavaliers with 25 points, seven rebounds and seven assists. He started the game shooting 1 of 11 from the field and closed 8 of 13.

Center Evan Mobley finished with 17 points and seven rebounds for Cleveland, which ended a three-game road trip with its second loss. The Cavaliers (38-29) have lost eight of their last 11 games overall.

Chicago took an 11-point advantage at halftime and never relinquished the lead in the second half. The Bulls were up 77-66 lead after three quarters.

Cleveland backup point guard Rajon Rondo turned his right ankle with three minutes left in the third quarter. He was playing in his second game after missing five with a sprained big toe. He was replaced by Brandon Goodwin.

DeRozan’s 17 points and four rebounds sparked Chicago’s 53-42 advantage at halftime. That included a heavily contested 16-foot jumper at the buzzer.

The Cavaliers shot just 36.7 percent from the field in the first half and were outrebounded, 26-18. Mobley had 13 points and four rebounds for Cleveland.

Garland shot 2 of 12 from the floor in the first half and turned the ball over four times.

Cleveland looked like a team that played in Miami on Friday night and didn’t get to Chicago until 4 a.m.

Tristan Thompson’s three-point play, followed by Coby White’s 3-pointer extended Chicago’s lead to 39-27 with 8:37 remaining in the first half.

DeRozan had eight points in the first quarter as the Bulls took a 24-22 lead. Mobley had 11 points for the Cavaliers.

Both teams were missing key personnel, with the Cleveland playing without Jarrett Allen, Lauri Markkanen and Caris LeVert. Chicago was minus Zach LaVine, Lonzo Ball and Patrick Williams.