Bulls’ resurgence may be tested by Kings’ De’Aaron Fox 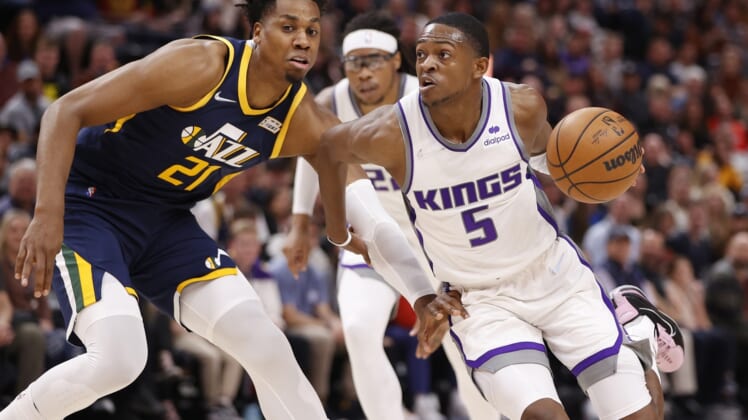 The Chicago Bulls are searching for their form after a recent season-worst five-game skid and they will attempt to win their third straight contest when they visit the Sacramento Kings on Monday night.

The Bulls emerged from their funk to post wins over the Detroit Pistons and Cleveland Cavaliers and now embark on a three-game trip that also includes games against Western Conference powers Utah and Phoenix.

It starts off in easier fashion against the downtrodden Kings, but Chicago could again be without All-Star guard Zach LaVine, who continues to have issues with his left knee.

LaVine sat out Saturday’s 101-91 home win over the Cavaliers and coach Billy Donovan isn’t sure if he will be available against the Kings.

“He wants to play all the time,” Donovan told reporters. “He had some discomfort, wasn’t feeling great. The decision was made by the medical staff that it’s better just to take off and see where he’s at going into Sacramento. Everything I’ve gotten from the doctors has been that they feel totally comfortable with him playing.

“It’s just something he’s going to have to manage and deal with throughout the course of the season.”

LaVine has scored at least 20 points in each of his seven appearances since the All-Star break.

MVP candidate DeMar DeRozan led the way with 25 points against Cleveland but was just 9 of 26 from the field. DeRozan has shot less than 37 percent in four of the past seven games.

His shooting woes follow his NBA-record, eight-game streak of scoring at least 35 points and shooting 50 percent or better from the field.

The Bulls got backup guard Alex Caruso back against Cleveland after a 22-game absence due to a broken right wrist. He recorded 11 points in 29 minutes.

“I’m excited to just play basketball again,” Caruso said afterward. “Caught myself just walking onto the court for pregame warmups just kind of smiling, just excited to be out there. When the game started, I was standing up for random plays that probably didn’t need to be cheered for.”

Sacramento is fading with four straight losses and nine in its past 11 games.

The Kings have clinched their 16th consecutive losing season and are en route to missing the playoffs for the 16th straight campaign.

The Kings have posted just eight winning campaigns in the franchise’s 37-season Sacramento era and all of them were during Hall of Famer Rick Adelman’s eight-season tenure (1998-2006) as coach.

Star point guard De’Aaron Fox is finishing his fifth season with the Kings, and he has been hot with two 40-point efforts over the past four games. Fox scored a career-best 44 points during a 114-113 road loss against the Dallas Mavericks on March 5 and had 41 points and 11 assists in Saturday’s 134-125 road loss versus Utah.

Fox is averaging 32 points in six games in March to raise his average to 23.0, send-best in his career behind last season’s 25.2.

Fox wasn’t even the game’s high scorer on Saturday as Jazz sixth man Jordan Clarkson made seven 3-pointers and scored a career-high 45 points. Clarkson made 15 of 21 shots overall.

“Obviously, defensively we weren’t very good at all,” Kings coach Alvin Gentry said afterward. “We let a guy get out of the box, we tried to double him, and get the ball out of his hands but we were just too loose.”

Sacramento might be without guard Justin Holiday on Monday after he departed the contest against Utah due to a non-COVID illness.

The host Bulls defeated the Kings 125-116 on Feb. 16 in this season’s first meeting. DeRozan scored 38 points and Coby White tallied 31. Fox had 33 points for Sacramento.