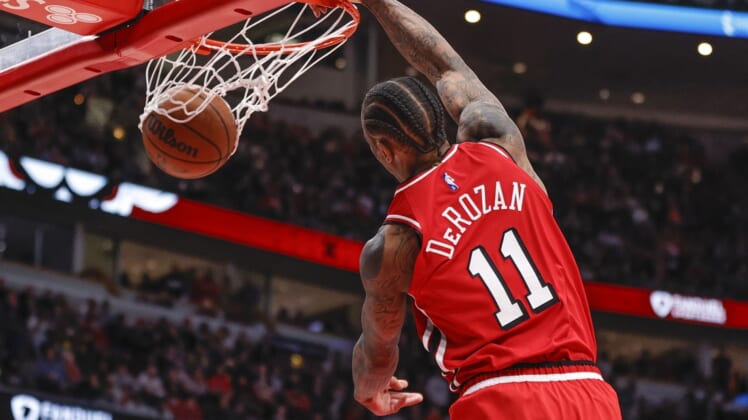 When the Miami Heat visit the Chicago Bulls on Saturday night, it will be a reunion for Kyle Lowry and DeMar DeRozan.

Those two stars were teammates for years with the Toronto Raptors.

Now, they are key players in their first year with new teams — Lowry with Miami and DeRozan in Chicago.

DeRozan scored a season-high 50 points Thursday, leading Chicago to a 135-130 overtime win over the Los Angeles Clippers. He scored 17 points in the fourth quarter and 10 more in OT.

It was DeRozan’s second career 50-point game and his first in more than four years.

“He’s special for us,” Bulls coach Billy Donovan said of DeRozan. “Guys like him have an unbelievable level of focus and concentration.”

DeRozan, 32, is averaging a career-high 28.0 points. In 43 minutes against the Clippers, he shot 17-of-26 from the floor, including 2-of-2 on 3-pointers. He went 14-of-15 on free throws, and he added six assists, five rebounds, one steal and just two turnovers in a virtuoso performance.

Chicago has a 45-32 record overall, including 27-10 at home. The Bulls, who started the weekend ranked fifth in the Eastern Conference standings, are trying to remain in the top six so that they can avoid the play-in tournament to qualify for the postseason.

“You see how tight the playoff race is,” DeRozan said. “Every single game is so important. We have no more room to drop games. That’s my mentality.”

Miami (49-28) has a tenuous half-game hold on first place in the East, heading into play Friday. The Heat are also just 22-16 on the road.

“We’ve been on the other side of it,” Heat coach Erik Spoelstra said, referencing when his team played against Lowry in past years. “There were many years I really didn’t like Kyle Lowry. He was such a thorn in our side.

“You can’t define it by an analytic. He just knows how to make winning plays.”

The Heat have a few of those guys, most notably Jimmy Butler, Tyler Herro and Bam Adebayo.

But if you ask Spoelstra, it’s Lowry who makes it all function.

“It’s a luxury to have a Hall of Fame point guard to choreograph your offense,” Spoelstra said. “He can also take on big challenges defensively.”