Bulls put win streak on line at home vs. Wizards 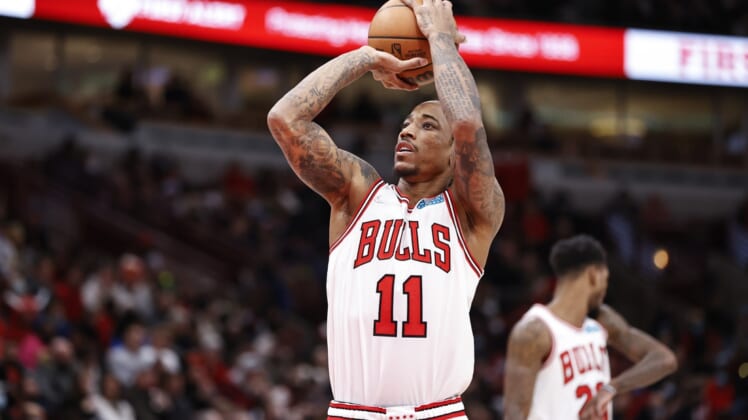 The Chicago Bulls will take a season-best eight-game winning streak into Friday’s visit from the Washington Wizards, and another victory would give the Bulls their best surge in more than a decade.

With respect to Shania Twain, the run evidently does not impress the Bulls much.

“We can’t be satisfied with anything,” Chicago’s DeMar DeRozan said. “We work extremely hard. We can’t take nothing for granted. We understand what’s at task, and that’s to continue to get better. Yeah, we won some games. We’re on a win streak. But we’re not satisfied with none of that.”

While DeRozan scored a game-high 29 points against the Magic, his 7-for-13 effort from the free-throw line gnawed at him as a welcome soft spot in the schedule beckoned.

“I usually go back at night, get my rhythm, make a couple hundred free throws in between games,” DeRozan said. “But with the back-to-backs the last two weeks, I haven’t been able to keep up with my rhythm. It showed (Monday). It don’t even look right. There’s no way I was going to go home feeling comfortable shooting that.”

Zach LaVine followed DeRozan with 27 points, his 29th game scoring 20-plus this season. DeRozan has contributed 27 games of 20-plus points, including 13 in a row.

Washington is coming off Wednesday’s 114-111 home loss to Houston. The Rockets’ Kevin Porter Jr. swished a 3-pointer with 0.4 seconds left to deal the Wizards their fourth defeat in the past six games.

Washington is optimistic about bolstering its rotation as the team begins a two-game trip. Spencer Dinwiddie, Aaron Holiday and Rui Hachimura recently cleared the NBA’s health and safety protocol for COVID-19, and coach Wes Unseld Jr. said Thomas Bryant is nearing a return from a left-knee injury.

“We’re just trying to manage it as best we can, hoping there’s light at the end of the tunnel, and we’re kind of coming to the end of this stretch,” Unseld Jr. said.

In the meantime, the Wizards’ regulars are working to manage an increased short-term workload.

“The tough part is, knowing you’re going to be playing a lot of minutes, trying to stay off your feet as much as possible when you’re not playing, to be in the game and have energy,” Kuzma said.

Chicago clipped host Washington 120-119 on Saturday, as DeRozan for the second straight day drilled a game-winning, buzzer-beating 3-pointer to boost the Bulls. A Kuzma 3-pointer with 3.3 seconds remaining had put the Wizards up by two.

The teams are slated to conclude the season series on March 29 in Washington.