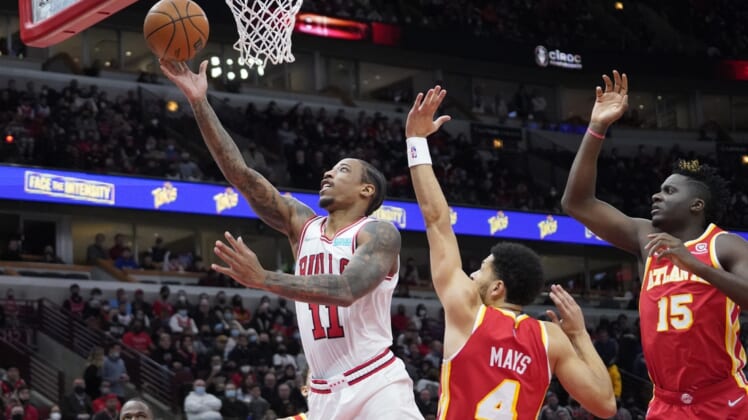 Zach LaVine scored 25 points and Nikola Vucevic and Coby White registered double-doubles as the host Chicago Bulls stretched their winning streak to five games with a 131-117 victory against the Atlanta Hawks on Wednesday night.

A 12-point winner at Atlanta on Monday, the Bulls swept the home-and-home series while sending the short-handed Hawks to their third straight defeat and fifth loss in six games.

Vucevic contributed 16 points and 20 rebounds for his third straight double-double and fourth in five games. White added 17 points and 12 of Chicago’s season-best 38 assists.

DeMar DeRozan (20 points), Ayo Dosunmu (14), Javonte Green (14) and Tyler Cook (10) also finished in double figures for the Bulls, who led by as many as 27 points. DeRozan added eight assists.

Trae Young scored a game-high 26 points to go with 11 assists for Atlanta in the opener of a six-game road trip. Beset by numerous absences due to the NBA’s health and safety protocols for COVID-19, the Hawks fielded a roster that included just four regular rotation players and had numerous additions who signed 10-day hardship contracts.

Atlanta’s Clint Capela had 18 points and 15 rebounds. Chaundee Brown Jr. (16 points), Cam Reddish (14), Malcolm Hill (13) and Cameron Oliver (13) were next. The Hawks hit 47.8 percent of their field-goal attempts but allowed the Bulls to make 61.9 percent from the floor.

A torrid, 69.8 percent effort from the field boosted the Bulls to a 74-53 lead at halftime. Chicago had 24 assists on 30 made field goals in the opening 24 minutes while boasting four players in double figures, led by LaVine with 15.

Chicago pulled away behind a 22-3 run to close the half. After the Hawks drew to within 52-50 on a Brown Jr. layup with 6:04 left in the second quarter, Atlanta tallied a mere three free throws before intermission.

The Bulls will try to claim the season series from the Hawks when the teams meet on Jan. 24 in Atlanta. The Bulls and Hawks are set to close the series Feb. 24 in Chicago.