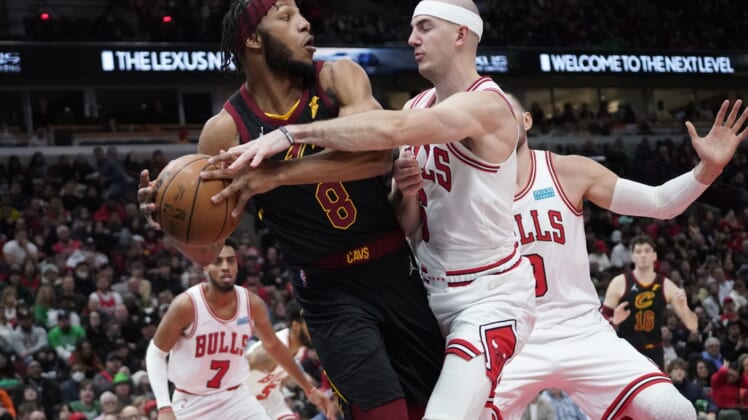 Chicago, Cleveland and Toronto are bunched up in the race for the fifth and sixth seeds in the Eastern Conference. The third team will drop to seventh place and the play-in tournament.

Neither the Bulls (42-31) nor Cavaliers (41-32) have been playing stellar basketball lately, each carrying a two-game losing streak into the matchup.

Cleveland is coming off a 117-104 loss at Toronto on Thursday, which enabled the Raptors to catch them at sixth place in the standings, one game behind Chicago.

The Cavs’ defense has come under question lately as they allowed the struggling Los Angeles Lakers to score 131 points on Monday and watched the Raptors sink 16 3-pointers on Thursday.

It comes down to Cleveland playing a more physical style in games that resemble a playoff atmosphere.

“There’s no remedy for it until you’re hit in the face,” Cavs coach J.B. Bickerstaff said. “We have to learn from it. You have a choice of fighting or running. Our guys don’t run. We’ll lay it out there.”

Cavs swingman Lamar Stevens said, “We want to learn from (the adversity). It will make us better in the end. At some point, you have to put your chest on somebody.”

Stevens will likely “put his chest” on Bulls guard Zach LaVine on Saturday.

LaVine is coming off a season-high 39 points in Chicago’s 126-109 loss at New Orleans on Thursday.

“I think everybody’s on high alert right now. Everybody knows what’s ahead of us and what we need to do. And if you don’t understand that in the locker room then you’re in the wrong place. We’ve just got to stop talking about it and get a win. It’s as simple as that.”

The Bulls faced the Pelicans without star swingman DeMar DeRozan, who sat out for precautionary reasons due to a mild groin strain.

After averaging a scintillating 34.2 points a game in February, DeRozan has dropped to 24.7 in March and has not matched his 27.6-point scoring average since March 9.

The Bulls’ third option is center Nikola Vucevic, who had 16 points and nine rebounds against New Orleans.

“The record says we’ve not been very good on the road,” Chicago coach Billy Donovan said of his team’s 16-21 mark on the road. Cleveland is 23-13 at home.

Cavs guard Darius Garland continues to make the team tick. He is averaging 25.7 points and 12.0 assists in March and has recorded double-doubles in nine of his last 11 games.

For Chicago, guard Lonzo Ball (knee) is out.