Bulls beat Cavs to gain step up in playoff race 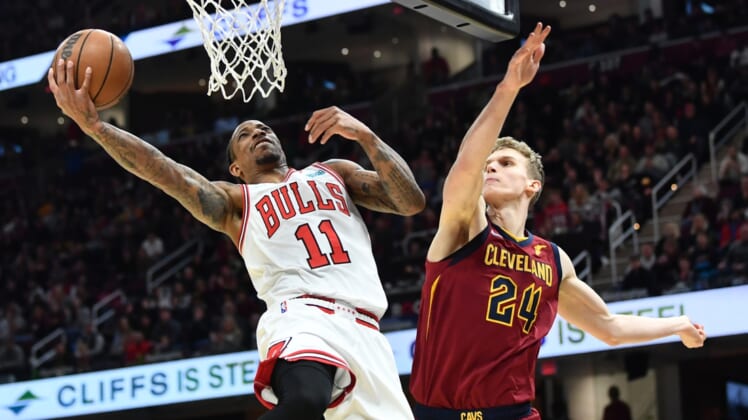 The visiting Chicago Bulls used 25 points by Zach LaVine and 20 from DeMar DeRozan to hold off the Cleveland Cavaliers 98-94 on Saturday.

The Cavs (41-33) had a chance to move into a tie with Chicago (43-31) for fifth place in the Eastern Conference playoff race, but instead dropped to seventh, the first position in the play-in tournament. No. 6 Toronto (42-32) moved past Cleveland after its dominating win over Indiana.

The Cavs trailed by 19 points before making a furious comeback in the second half. Darius Garland paced Cleveland with a game-high 28 points, six rebounds and five assists.

Caris LeVert, making his second start of the season since coming to the Cavs at the trade deadline, added 17 points and Lauri Markkanen had 14 points and nine rebounds before fouling out.

Chicago led 95-83 with 1:12 to play before Garland and Evan Mobley made a late push, combining to score 11 points before coming up short.

Cleveland has now lost three in a row and six of its last nine.

The Bulls came into the contest having lost five of their last six.

Chicago held onto a 12-point advantage after three quarters, 75-63.

Cleveland recorded its lowest point total in the first half all season. It shot just 31 percent from the field and 1 of 18 (5.6 percent) from the 3-point line. Garland was the only player in double figures in scoring with 14 points.

DeRozan was forced to the bench with about 8 minutes left in first half with three personal fouls. It didn’t make a bit of difference.

Nikola Vucevic had 10 points to lead Chicago to a 28-16 advantage after the opening quarter. He finished with 16 points and nine rebounds.