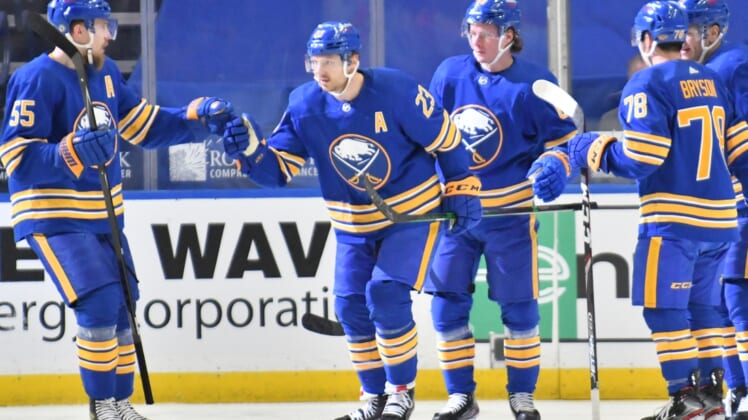 After blowing a 3-0 third-period lead in Monday’s 4-3 overtime loss to the Flyers, Buffalo had no such concerns this time, building a 4-1 lead after two periods.

Playing his 22nd NHL game, Fogarty padded the Sabres’ 2-1 lead with his second-period goal, then assisted on Casey Mittelstadt’s score later in the frame.

Ivan Provorov scored and Brian Elliott allowed four goals on 16 shots before being pulled for Philadelphia, which had won two straight overall and five straight against the Sabres.

After Sean Couturier hit the goal post in the opening seconds, it seemed like Philadelphia would be the early aggressor. However, Buffalo scored first when Reinhart ripped a shot toward the net that caromed in off the inner thigh of Flyers defenseman Justin Braun at the 9:32 mark of the first period.

The Sabres made it 2-0 nearly 2 1/2 minutes later. Riley Sheahan blocked a Philadelphia shot at the point, corralled the puck, then broke in before stopping, spinning and putting a pass on the stick of a trailing Lazar, who blasted the one-timer past Elliott.

Philadelphia, got on the board 3:50 into the second period when, Provorov, the overtime hero on Monday, drove a laser from the point to make it 2-1.

Buffalo, however, answered when an unchecked Fogarty easily put in the rebound of Ristolainen’s shot with 10:18 to go in the middle frame. Fogarty then delivered a cross-slot pass to Mittelstadt, who went five-hole to Elliott with 4:21 left in the second and the Flyers down 4-1.

Montour added his late goals, one an empty-netter, 37 seconds apart on the same Flyers’ power play.