Leipold, who led the Bulls to three straight bowl berths, accepted the top coaching job at Kansas on April 30.

It’s the first head coaching job for Linguist, 37, and also a homecoming. He coached defensive backs and was the defensive passing game coordinator for the Bulls in 2012-13, working with a group that included future NFL All-Pro Khalil Mack.

A native of Dallas, Linguist played strong safety at Baylor from 2003-06. He entered coaching in 2007 and has put together a resume that includes stops at Valdosta State, James Madison, Iowa State, Mississippi State, Minnesota and Texas A&M.

He spent the 2020 season as cornerbacks coach of the Dallas Cowboys before accepting the job as defensive backs coach and co-defensive coordinator at Michigan – a position he’s leaving after four months.

Linguist is known as a strong recruiter who had a big hand in Texas A&M landing top-six recruiting classes in 2019 and ’20, as ranked by the 247Sports composite.

The Bulls, who play in the Mid-American Conference, were 6-1 in the shortened season in 2020, which ended with a 17-10 win over Marshall in the Camellia Bowl on Christmas Day. 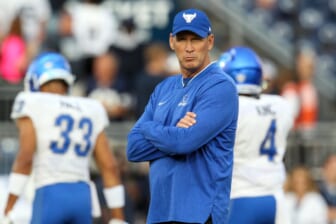