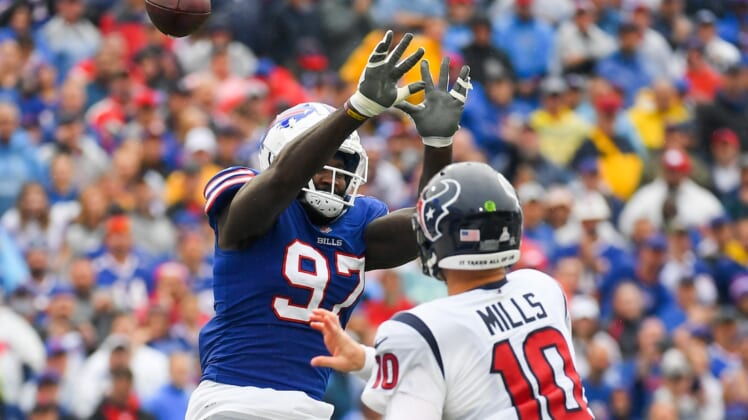 Allen completed 20 of 29 passes for 248 yards with an interception as Buffalo (3-1) won its third straight game and stayed atop the AFC East. The Bills have outscored Miami, Washington and Houston by a combined 118-21.

Their defense was far too much for rookie quarterback Davis Mills, making his second NFL start. Mills hit on 11 of 21 passes for just 87 yards, tossing four interceptions and finishing with a QB rating of 23.4.

The Texans (1-3) actually could have taken a short field goal lead than five minutes into the game to grab an early lead, but opted to go for it on fourth-and-3 at the Buffalo 6, four plays after Lonnie Johnson intercepted Allen and returned it 32 yards to the 13.

The gamble didn’t pay off as Allen’s pass for David Johnson fell incomplete. Houston only got into Bills territory twice more after that, but Mills’ interceptions finished both possessions.

Buffalo got the only points it would need with 1:59 left in the first quarter when Allen pump-faked and hit Knox over the middle for a 25-yard touchdown. It was the third straight game the duo had connected for a score.

Bass made it 16-0 at halftime with second-quarter field goals of 33, 26 and 21 yards. That the Bills couldn’t score touchdowns in the red zone was of little consequence because their defense squashed everything Houston tried.

Another Bass field goal, a 28-yarder with 8:49 left in the third quarter, upped the advantage to 19-0. Buffalo turned it into a rout with three fourth quarter touchdowns.