Buffalo Bills tight end Dawson Knox is slated to return to action Sunday against the New York Jets after a two-game absence due to a hand injury.

Knox underwent surgery to repair a fracture in the right hand that he injured against the Tennessee Titans on Oct. 18.

The 24-year-old was a full practice participant on Thursday and Friday.

Knox has a team-leading five touchdown receptions and has 21 catches for 286 yards in six games.

“He’s a guy that’s big, powerful, strong, fast and obviously he’s made some plays for us this year,” Bills quarterback Josh Allen said. “We’re going to need him to continue to make plays for us if we want to be successful.” 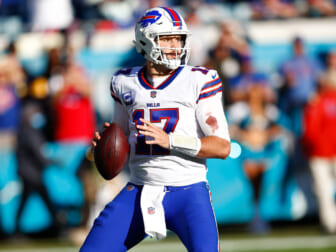 Buffalo will be without a key cog in middle linebacker Tremaine Edmunds (hamstring). Edmunds, who has a team-high 55 tackles, didn’t practice all week and was ruled out on Friday.

Running back Zack Moss (concussion) is listed as questionable.

Right tackle Spencer Brown (back) is set to go after sitting out two games, including last Sunday’s 9-6 loss to the Jacksonville Jaguars.