The Buffalo Bills will need a new starting punter ahead of the 2022 season after Matt Araiza has been released due to his pending rape lawsuit. 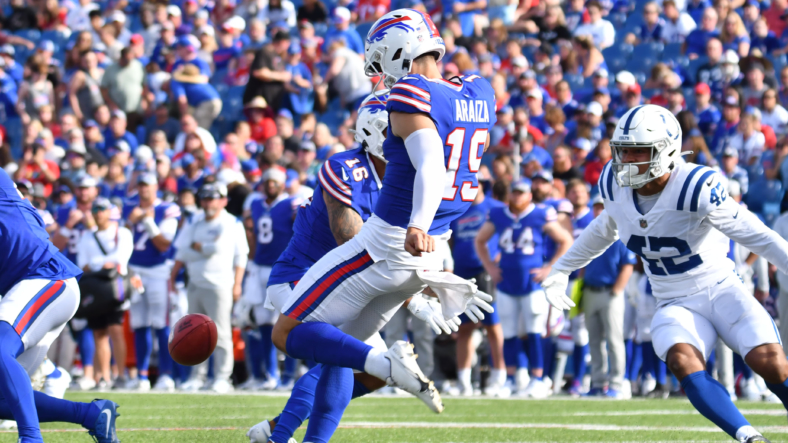 Former San Diego State University punter Matt Araiza’s stay in the NFL was a short one. Before he could even unpack his bags after landing with the Buffalo Bills in the sixth round of the NFL Draft in April, Araiza has been released from his rookie contract.

Unlike many player transactions this time of year, this transaction has nothing to do with Araiza’s play on the field.

Instead, for the Bills, Araiza’s ongoing civil lawsuit that accuses him of gang rape when he was a member of the Aztecs in college has become too loud to ignore.

On August 14, Araiza made his preseason debut, and it drew plenty of fanfare after he connected on an 80-yard punt. Then just 11 days later, the disturbing report emerged on Thursday, potentially tying him to behavior that can not go unaddressed. Friday, Araiza released a public statement, noting the incident has been misconstrued, with the hope of quickly clearing his name.

The Bills also had a statement of their own, indicating they are conducting a thorough investigation and would no longer comment on the matter.

Clearly, the Bills came to a quick conclusion. Whatever talent Araiza may possess, it’s not worth supporting, especially if he’s anywhere near guilty of what he’s accused of.

Buffalo Bills will once again look for a new punter

How all this transpired for the Buffalo Bills is a bit ironic. Three days before the lawsuit emerged, the Bills released their punter from last season. Matt Haack quickly latched on with the Indianapolis Colts after Rigoberto Sanchez tore his Achilles.

With the Bills unable to go back to Haack, and with Araiza clearly not an option, they’ll have to once again look for a new punter in 2022. They may not have been scouting other punters, with Araiza and Haack on the roster as of a week ago, but a potential Super Bowl contender suddenly has a pressing need.

The Bills will be bringing in several different punters for tryouts, maybe even the recently released Jordan Berry, and after Tuesday’s roster cutdown date, plenty more will become available. Yet, it’s also possible Bills general manager Brandon Beane will try and trade for a player who may eventually be cut, just to ensure they land their guy.

The Bills are 25th on the waiver priority list thanks to their 2021 success, which means 24 other teams will have a chance to place a waiver claim on other punters who are released before the Bills get a chance to sign someone. That’s why a trade may be more necessary, even if it is just a punter. What we do know is it won’t be third-string quarterback Matt Barkley putting his boot to the ball in Week 1 or at any other point for the Bills during the regular season as he did in their preseason finale.