McKenzie posted the letter he received from the league on Twitter.

“They got me! @NFL you win!” McKenzie wrote.

The letter says McKenzie failed to wear a mask at least twice on Wednesday, once while walking through the indoor fieldhouse and into the training room and again while in the meeting area of the weight room.

Potential discipline could stretch up to a four-game suspension for conduct detrimental to the team under the repeat offenders provision in the NFL’s COVID-19 policy agreed upon by the NFLPA.

Beasley, who has been vocal in his anti-vaccine stance, did not disclose the amount of his fine. NFL Network reported it was for the same $14,650. 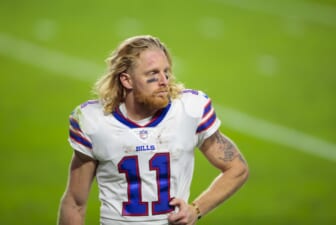 “Don’t worry they got me too. But I was wearing a mask when I was in close contact with fully vaxxed trainer who tested positive and still got sent home. So what’s the point of the mask anyways. Meanwhile I’m here still testing negative and can’t come back. Make it make sense.”

The letter from the NFL states that McKenzie received a written warning on July 27 for “refusing to wear a mask and were specifically advised that ‘future violations of the Protocols will result in increased discipline, including for conduct detrimental.'”

After a member of the Bills training staff, who was vaccinated, tested positive for COVID-19 on Tuesday, four Bills players were identified as close contacts and are required to sit out five days. McKenzie was not one of those players. Beasley, receiver Gabriel Davis and defensive tackles Star Lotulelei and Vernon Butler were placed on the reserve/COVID-19 list.