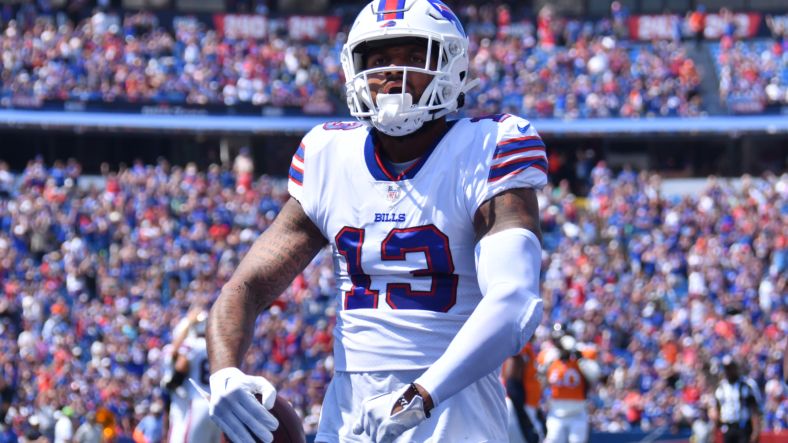 The Buffalo Bills had a surprising addition to the injury report Saturday, as Gabriel Davis showed up as questionable for Monday night’s clash with the Titans after missing practice with an ankle injury. According to ESPN, Davis practiced fully all week and was warming up per usual ahead of Saturday’s practice session.

The Bills, already with three defensive players listed as questionable, will have to find a new secondary offensive weapon if Davis is unable to go Monday. It is usually a bad sign when an injury designation pops up this late in the week. Let’s look at who Josh Allen may look to instead.

If Gabe Davis is unable to go, the Bills have a number of options to look to for more targets, but it will be interesting to see how they replace Davis’ outside presence, as the next few men up are not acclimated with that role. While there are plenty of resumes that help offset the loss of Davis, almost all of the candidates have a reason to second guess a bigger role in this week’s game plan. Let’s look at some of those options.

Isaiah McKenzie was likely in for a bigger role this week, regardless of Davis’s status. McKenzie was only targeted three times in the season opener vs. the Rams, for two catches for 19 years, including one for a touchdown. His 43% snap share was dominated with mostly slot snaps, which is the role he is expected to share all season with Jamison Crowder (31% Week 1).

But the shifty wide receiver did have a ball go right through his hands, into defender Terrell Lewis’s stomach for an interception. He shouldn’t line up too much on the outside if Davis is absent, but more targets should be coming his way this week.

Another guy in line for more looks, is Jamison Crowder, who looked sharp in his first game as a Bill. A free agent acquisition in the offseason, Crowder started slow in training camp and in preseason with a hamstring injury.

Even rumored to be a surprise cut, the former Jet took over punt return duties in Week 1 while hauling in three catches for 28 yards. He was also criticized for not coming back on a ball from Josh Allen, which allowed a Rams defender to jump in front of for another Rams INT.

Dawson Knox gets back in the picture

Dawson Knox didn’t make a huge impact in the season opener. Just coming off the death of his brother, Luke, it would be totally understandable if he wasn’t fully involved in the team’s game plan. He still played 86% of the snaps, and after signing a huge $53.6 extension before the start of the season, it’s obvious that the Bills have big plans for Knox going forward.

We fully expect a big bounce-back game from Knox this week, as the biggest benefactor of a potential Davis absence.