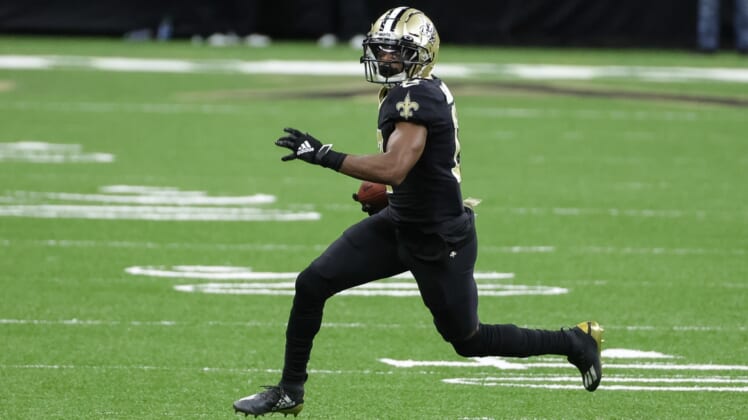 Emmanuel Sanders got a birthday present Wednesday — an aggrement on a brand-new contract on a probable Super Bowl contender.

On the same day the 11-year veteran wideout turned 34, Sanders came to terms with the Buffalo Bills on a one-year contract worth a reported $6 million. The New Orleans Saints released him from his contract earlier in the day.

Sanders is expected to travel to Buffalo for a physical on Thursday. He joins the NFL’s second-highest scoring offense from a season ago (31.3 points per game), led by quarterback Josh Allen and receiver Stefon Diggs.

He previously played four seasons with the Pittsburgh Steelers (2010-13) and five-plus seasons with the Denver Broncos (2014-19) before being traded to the San Francisco 49ers for the second half of the 2019 season.

Sanders has 662 receptions for 8,619 yards and 47 touchdowns while recording three 1,000-yard seasons in his 11-year career, all with the Broncos. He has played in three Super Bowls for three different organizations, wining a ring with Peyton Manning and the Denver Broncos in 2015 while losing in 2011 with the Pittsburgh Steelers and 2019 with the 49ers.

In other moves Wednesday, the Bills agreed to trade tight end Lee Smith to the Atlanta Falcons for a seventh-round pick in 2022. Smith, 33, has played six of his previous 10 seasons with Buffalo in two separate stints (2010-14, ’19-20).

Later the Bills also revealed they have to re-sign cornerback Levi Wallace. Originally an undrafted free agent out of Alabama in 2018, the 25-year-old has started all of his 35 games played over his three NFL seasons with the Bills, with 16 starts in 2019 and 12 last season. He posted 48 tackles and two interceptions in 2020.