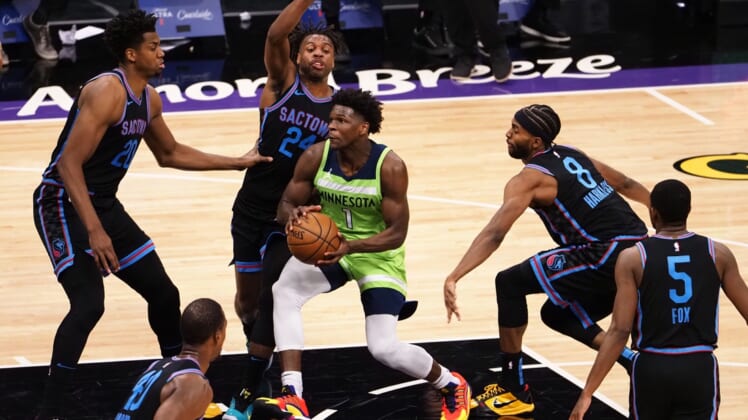 Buddy Hield drilled the go-ahead 3-pointer with 8.8 seconds left as the host Sacramento Kings notched a 128-125 victory over the Minnesota Timberwolves on Wednesday night to salvage the second contest of a back-to-back between the teams.

De’Aaron Fox recorded 30 points and seven assists and Hield made seven 3-pointers as part of a 29-point effort as the Kings (24-35) prevailed for just the second time in the past 12 games. Sacramento outscored the Timberwolves 26-12 over the final 5:48.

Karl-Anthony Towns scored 26 points and reserve Naz Reid added 24 on 11-of-15 shooting as the Timberwolves (16-44) again failed to post back-to-back victories since winning their first two games of the season.

Anthony Edwards and Juancho Hernangomez scored 16 points apiece for the Timberwolves. D’Angelo Russell contributed 15 points and nine assists for Minnesota, which defeated the Kings 134-120 on Tuesday.

The Kings trailed by 10 before running off 12 straight points to take a 117-115 lead with 2:41 left. Haliburton made two 3-pointers and Hield hit one during the spurt.

Ricky Rubio tallied 11 points for Minnesota, which shot 52.9 percent from the field and made 15 of 34 from 3-point range.

Chimezie Metu added 10 points for the Kings, who made 58.1 percent of their shots and 17 of 33 from behind the arc.

The Kings led 70-59 at halftime before Minnesota erupted for 39 third-quarter points.

Sacramento knotted the score on Haliburton’s 3-pointer with 9.7 seconds left before Hernangomez made a buzzer-beating 3-pointer to give Minnesota a 98-95 lead entering the final stanza.

Reid and Rubio made consecutive 3-pointers to give the Timberwolves a 110-101 lead with 8:25 remaining. Edwards followed with a basket to increase the lead to 11 with 7:06 left.

Hield scored 21 points as Sacramento built the 11-point halftime edge. Hield was 5 of 7 from 3-point range and the Kings were 10 of 16 as a team.