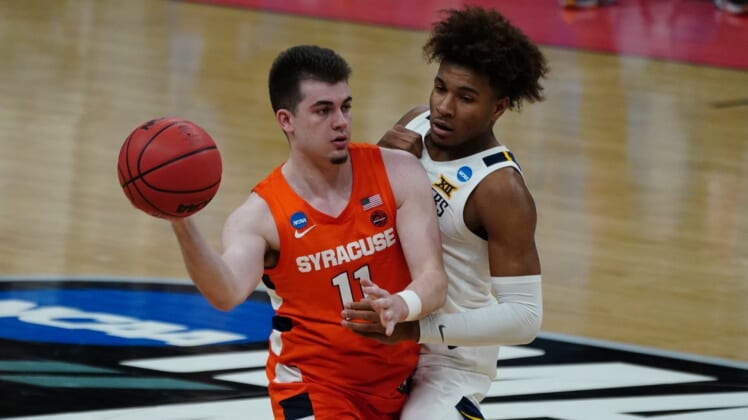 Buddy Boeheim stayed hot by scoring 22 of his 25 points in the second half to help 11th-seeded Syracuse hold off No. 3 West Virginia 75-72 in a second-round Midwest Regional game in Indianapolis on Sunday.

The Mountaineers used a 9-2 run in the final minute to get within 74-72 when Gabe Osabuohien drove for a layup with 4.5 seconds to go. The inbounds pass went to Boeheim, who was fouled on the catch near halfcourt with 2.2 seconds left.

He made the first throw but missed the second, with the ball ending up in the hands of West Virginia’s Miles McBride, who traveled in the backcourt to effectively end the game.

Syracuse (18-9) has reached the Sweet 16 for the third time in the past five tournaments as a double-digit seed. The Orange will play either No. 2 seed Houston or 10th-seeded Rutgers.

Boeheim hit 6 of 13 3-point shots and is now 32 of 66 from behind the arc in the past six games. Joseph Girard III, Quincy Guerrier and Marek Dolezaj each had 12 points for Syracuse. Girard added seven assists and six rebounds.

Boeheim, who was averaging 26.2 points over his previous five games, hit multiple key shots after the Mountaineers erased a 12-point second-half deficit. McNeil capped a personal 9-0 run — on a trio of 3-pointers on consecutive possessions — for a 53-52 lead with 9:47 to go.

Boeheim answered with a fast-break layup to give the lead back to Syracuse. Although West Virginia would tie the game at 56, it never led again.

After the 56-all tie, Boeheim scored five points in a 14-3 run for a 70-59 lead with 2:19 to go before West Virginia battled back to create drama in the final minute at Bankers Life Fieldhouse.