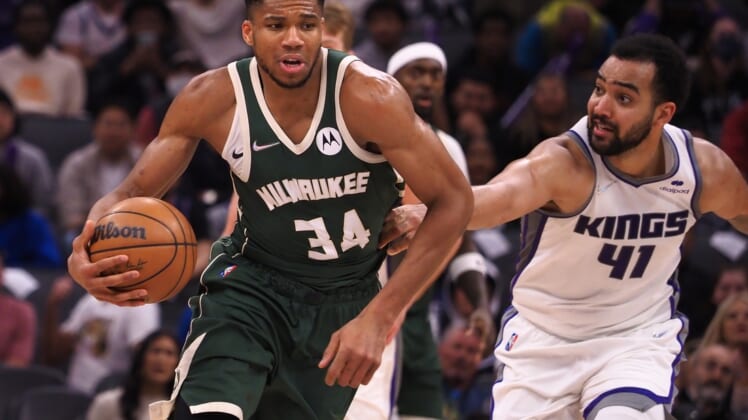 Giannis Antetokounmpo recorded 36 points and 10 rebounds and the visiting Milwaukee Bucks notched a 135-126 victory over Sacramento on Wednesday night to defeat the Kings for the 12th straight time.

Khris Middleton made a season-high seven 3-pointers and recorded 32 points, eight rebounds and eight assists as the Bucks won for the eighth time in their past nine overall games. Jrue Holiday contributed 21 points and four steals and Bobby Portis added 12 points for Milwaukee.

Donte DeVincenzo and Davion Mitchell each scored 19 points off the bench, Trey Lyles had 12 points and 12 rebounds and Harrison Barnes tallied 10 points for Sacramento.

The score was knotted at 126 before Wesley Matthews buried a tiebreaking 3-pointer for the Bucks with 1:32 left to start a game-ending 9-0 run. Antetokounmpo scored in the interior 28 seconds later and added two free throws. Portis also added sank two free throws to close out Milwaukee’s sixth straight win in Sacramento.

The Bucks connected on 52.8 percent of its field-goal attempts, including 18 of 35 from 3-point range.

Middleton responded with five straight points to put the Bucks back ahead, but the Kings answered with six in a row to hold a 118-115 lead with 4:53 left.

Just over three minutes later, Fox drained a 3-pointer to tie it at 126 before the Bucks went on the game-ending surge.

Middleton scored 17 first-half points and Antetokounmpo added 14 as the Bucks led 68-61 at the half. Sabonis had 13 in the half for Sacramento.

The Kings led 50-42 after Justin Holiday’s 3-pointer with 8:05 left in the half. Milwaukee answered with nine straight points and 25 of the next 32 to take a 67-57 advantage before setting for the seven-point lead at the break.

Antetokounmpo scored 14 points in the third quarter as the Bucks took a 101-92 lead into the final stanza.