Despite adding “NBA champion” to his lengthy resume last season, Milwaukee Bucks star Giannis Antetokounmpo still has his sights set on greater heights as he readies to return to the court.

“I’m not satisfied. I’m not even close to being satisfied,” Antetokounmpo said during the Bucks’ media day Monday. “That’s the tone we got to set as a team. As the leader of this team, that’s the tone I’m going to set. We understand that teams are coming for us, but we’re going to be ready.”

The two-time MVP won the first title of his career when the Bucks beat the Phoenix Suns in six games to claim their first NBA championship since 1971. Antetokounmpo was named Finals MVP, averaging 35.2 points, 13.2 rebounds and five assists per game in the series.

During the regular season, he averaged 28.1 points, 11 rebounds and 5.9 assists in 61 games, finishing fourth in the league MVP vote after claiming the award the previous two campaigns. 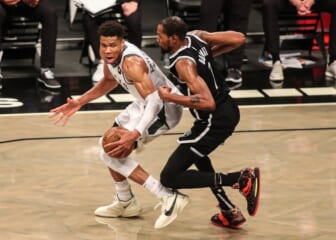 Antetokounmpo was also asked about his left knee, which he injured during the Eastern Conference finals. He missed the last two games of that series as the result of the ailment.

“I feel good,” he said. “Obviously I gotta do my treatment like always, take care of my body. Just manage it, you know? I don’t think there’s no rush for me here. I’m good to go. But if I feel pain again or whatever the case might be, I listen to my body. When you feel pain, it’s your body telling you that it’s protecting you and you can’t go no more.

The Bucks begin their title defense at home against the Brooklyn Nets on Oct. 19.