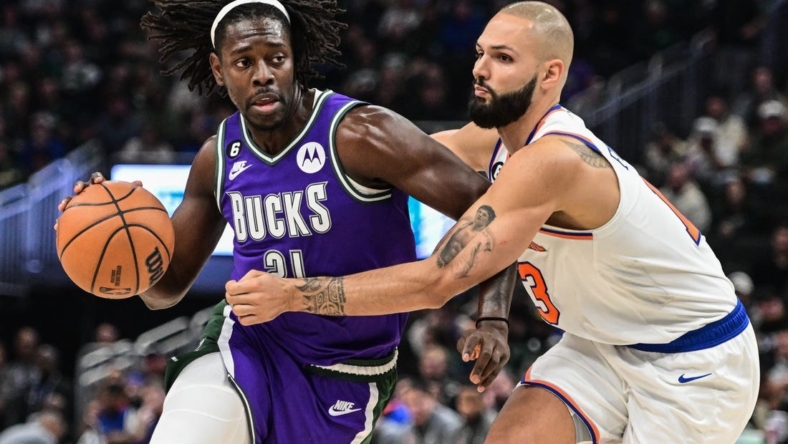 Giannis Antetokounmpo collected 30 points, 14 rebounds and nine assists as the Milwaukee Bucks led virtually the entire way, withstood a rocky finish, and remained unbeaten with a 119-108 victory over the visiting New York Knicks on Friday night.

Antetokounmpo made 11 of 22 shots, finished with his fourth straight double-double and reached at least 30 points for the third straight game as the Bucks placed seven in double figures and won their fourth straight to remain the NBA’s lone unbeaten team.

RJ Barrett scored 20 points to lead the Knicks, who saw their three-game winning streak stopped. Julius Randle and Immanuel Quickley added 14 apiece while Jalen Brunson was held to 13 as the Knicks shot 39.8 percent and lost for the 16th time in the past 20 meetings.

Milwaukee seemingly had the game secured when Antetokounmpo’s ninth assist set up a layup by Hill to give the Bucks a 115-98 lead with 4:53 remaining. New York scored the next eight points and Milwaukee missed 12 straight shots until Holiday intercepted an errant pass from Quickley and coasted in for a layup to clinch the win with 29.3 seconds left.

New York’s only lead occurred when Quickley hit a 3-pointer with 53 seconds left in the first and Milwaukee held a 26-24 lead on Portis’ tip-in at the buzzer before taking a 59-53 lead by halftime when Brunson’s 52-foot 3-pointer was ruled to be after the horn.

After Barrett’s finger roll brought the Knicks within 72-66 with 7:21 left in the third, the Bucks scored 18 straight points and took a 90-68 lead on George Hill’s 3-pointer with 4:10 to play. New York outscored the Bucks 17-6 the rest of the third and trailed 96-85 heading into the fourth.