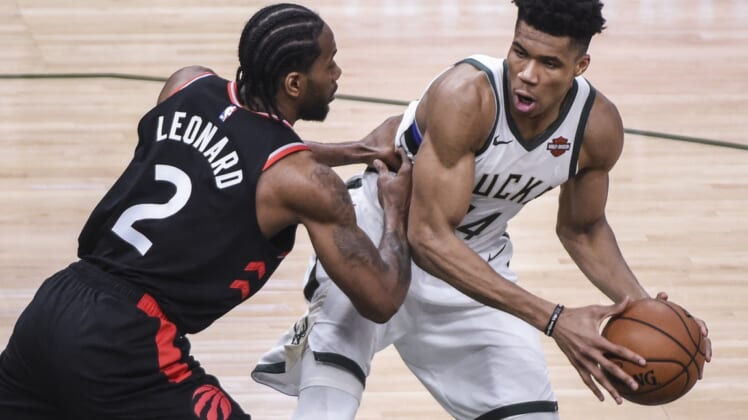 Thanks to a double-overtime thriller in Game 3, the Toronto Raptors have a chance to tie the Eastern Conference Finals up in Game 4 against the Milwaukee Bucks.

The big picture: This series is still 100-percent up for grabs. Neither team has won a game on the road, but the Bucks could have stolen Game 3 if Giannis Antetokounmpo played better offensively. Toronto was saved in the end by Kawhi Leonard once again coming up huge in the clutch.

Here’s a look at a few burning questions. The answers will determine whether the Bucks or Raptors win Game 4.

Is Kawhi’s knee going to be a lingering issue?

What Leonard accomplished in the last game was nothing short of remarkable. He absolutely took over the double-overtime period en route to a 36-point performance that saved Toronto’s title aspirations. And he did it all on a sore knee stemming from a first-quarter incident that clearly gave him problems.

After the game he said he was good and that “this is playoff basketball.” Given the way he pushed through the pain and discomfort, we’d be foolish to bet against Leonard, even if he knee isn’t really “good.”

Yet we’ll also be watching closely early in Game 4 to see if the injury is still evident, because even superstars like Leonard can be hampered by a lingering lower-body injury.

Will the Bucks get hot from outside?

Despite winning the first two games handily, and nearly pulling off a road win in Game 3, Milwaukee has been ice cold from the perimeter in this series. As a team, the Bucks averaged 34.3% from three against Boston and 37% against Detroit. In three games against Toronto, they’re hitting just 29.5% of their three-pointers.

Some of this is due to the outstanding perimeter defense the Raptors bring on a nightly basis. Some of it is just due to some cold hands. If the Bucks can shrug off the cold streak, then Toronto won’t stand a chance given the way this series has gone otherwise.

If the Raptors are going to tie the series up, then it stands to reason Kyle Lowry and Danny Green need to step up their games offensively.

Lowry has been up and down throughout the playoffs. His 30-point effort in Game 1 against Milwaukee was a big reason the Raptors hung tough and lost by just eight points. Then his shooting touch abandoned him in Game 2, and he took just seven shots in Game 3, combining for just 26 points in these two games.

Green has been darn-near invisible offensively. He’s hitting just 21.5 percent from the field in the Eastern Conference Finals, averaging 5.7 points per game.

Both players need to step up big for the Raptors in Game 4.

Which Giannis will we see in Game 4?

Giannis Antetokounmpo couldn’t hit the broad side of a barn with a handful of rice in Game 3. He shot 31.3 percent from the field and made just 2-of-7 free throws — including one ghastly air ball.

Worse than that, he was extremely tentative. Normally one of the most aggressive men in the Association when it comes to driving into the lane, he was seemingly overwhelmed by Toronto’s defense and just stopped attacking.

The end result was a 12-point effort that concluded with Giannis fouling out in overtime. If the Bucks are going to take a commanding 3-1 lead in Game 4 Tuesday night, the Greek Freak needs to attack the rim with abandon and regain his shooting touch.