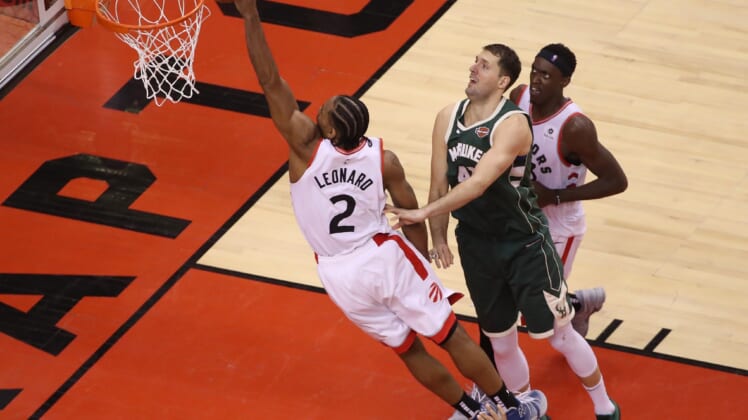 The Toronto Raptors needed a victory in the worst possible way Sunday night at home in Game 3 of the Eastern Conference Finals against the Milwaukee Bucks. Down 2-0, a loss would have put them in a position no team has ever come back from in NBA playoff history.

With the home crowd on their side, the Raptors jumped out to an early lead and were up 30-21 after the first quarter. That lead shrunk by two points heading into halftime as the Bucks kept themselves in it with a 30-point second quarter. By the end of three, Toronto’s lead was just two points, setting up a do-or-die fourth quarter for the home team. Only, after four quarters, nothing had been decided.

It took two overtime periods to decide this game, as the two teams were tied up at 113 apiece after the initial extra period. In the end, Kawhi Leonard took over the second overtime period and the Raptors won, 118-112.

Here’s what we learned from the Bucks and Raptors in Game 3.

Siakam and Gasol came to play

Pascal Siakam and Marc Gasol were pretty invisible for the Raptors in Game 2. They combined for 10 total points on 18 shots, and 6 total rebounds. Gasol was a liability on offense, and both were non-factors on the boards.

In Game 3, they embodied the desperation Toronto had to have to avoid falling 3-0. They combined for 20 points in the first half, gave us the best highlight of the first quarter and energized their home fans in a major way.

All told, these two piled up 41 points. They also pitched in 23 combined rebounds, eight assists, four steals and six blocks. Their production was desperately needed and will have to continue in this series if the Raptors have a shot at winning.

Giannis was a liability on offense

Giannis only had six points on 3-7 shooting in the first half, attempted zero free throws and failed to hone in on a single offensive rebound. The Raptors did an incredible job defensively on the superstar. Yet outside of a brilliant yet controversial Euro-step-fueled bucket Giannis was simply not as aggressive as he needed to be in the first half.

This trend continued in the second half as well. At the end of the third quarter, Giannis was still stuck at six points. Meanwhile, he had six turnovers at this point in the game.

An aggressive Giannis showed up in the final period. However, he also did this:

Giannis was just not himself all night long.

All told, the Greek Freak managed just 12 total points. It’s hardly what we’ve grown to expect from him as a scorer, and it absolutely hurt his team. Though, he did manage to contribute in other ways with an astounding 23 rebounds, seven assists and four blocks before fouling out in double-overtime.

Norman Powell was by far the best bench player for Toronto. While Danny Green struggled to do anything offensively, Nick Nurse turned to Powell and he delivered with 19 points, four rebounds, three assists and one steal before fouling out late. Unfortunately, nobody else was able to contribute much offensively from Toronto’s bench, which finished with 26 total points.

On the other side, Milwaukee displayed incredible balance with six players scoring in the double digits. The Bucks’ bench contributed 54 points (with George Hill and Malcolm Brogdon posting team-high points totals), significantly outplaying Toronto’s for the third consecutive game.

Leonard came down a bit awkwardly in the first quarter, grimaced and briefly touched his right knee. From that moment on, he was unable to attack the rim as aggressively as we’ve seen from him throughout the postseason. He was clearly favoring the knee and struggled to elevate in the paint.

With that injury lingering, Leonard struggled from the field for most of the game. He hit just 11-25 shots. Still, despite his obvious discomfort, Leonard was able to take what the defense gave him and put up 36 points, nine rebounds and five assists for the Raptors while providing a huge boost in double-overtime. Injured or not, he’s a superstar and played like it.

A win is a win. Toronto will take Game 3’s victory no matter how ugly it was. No team has yet won a game on its opponent’s home court, so really, no team has taken any kind of stranglehold on the series.

There are a couple of things that stand out as particularly troubling for Toronto. The first is obviously Leonard’s knee. If he’s still dealing with discomfort going forward, it could turn into a major storyline. The second is that Toronto’s bench is just nowhere near as potent as what Milwaukee puts out on a nightly basis.

Especially in a game that saw Giannis struggling so much offensively, Toronto’s lack of firepower overall is a troubling trend that could ultimately doom the franchise to disappointment when it’s all said and done.