The Milwaukee Bucks cruised to a Game 3 victory over the Miami Heat on Thursday night, but will now be forced to move forward without Donte DiVincenzo for the rest of the NBA Playoffs.

DiVincenzo, the No. 17 pick in the 2018 NBA Draft, played just nine minutes in Game 3. He missed all four shots from the field before exiting after a non-contact leg injury. Milwaukee’s 24-year-old guard underwent testing, which delivered news the organization was hoping to avoid.

According to The Athletic’s Shams Charania, DiVincenzo suffered a serious tendon injury in his left foot and will be forced to sit out the remainder of the playoffs.

He started in 66 games for the Bucks this season, averaging 27.5 minutes per contest. Milwaukee relied heavily on his outside shooting, with the third-year guard averaging 37.9% from beyond the arc and averaging two 3-pointers made per contest.

DiVincenzo struggled from the 3-point line during the playoffs, shooting just 13.9% and had racked up six turnovers in 70 minutes. But the former Villanova standout had proven in the past he could get hot in the clutch and his injury will create a void in Milwaukee’s rotation. 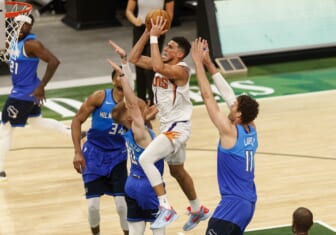 With the 24-year-old sidelined, the Bucks will need Bryn Forbes to sustain his playoff magic. The 27-year-old signed with the Bucks this offseason and has been a revelation in the series against Miami. Forbes exploded in Monday’s Game 2 victory, scoring 22 points and sinking six 3-pointers.