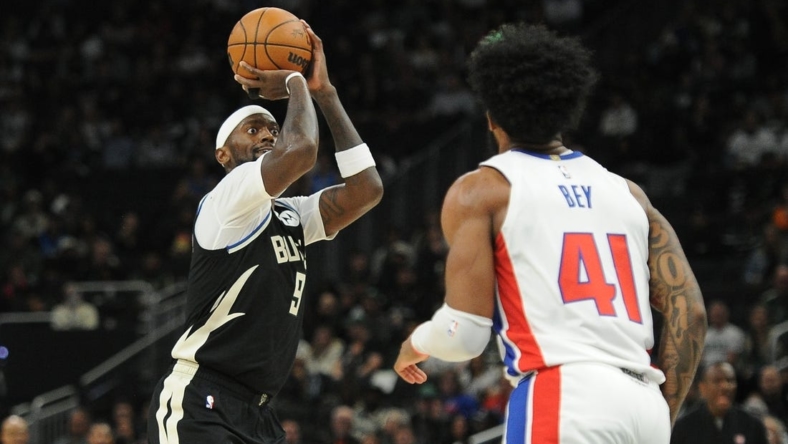 Giannis Antetokounmpo had 31 points, Jrue Holiday hit a tiebreaking 3-pointer in the final minute and the host Milwaukee Bucks remained the NBA’s only unbeaten team by downing the Detroit Pistons 110-108 on Monday.

Holiday finished with 25 points, 10 assists and seven rebounds as the Bucks defeated their Central Division rival for the 14th time in the last 15 regular-season meetings. They’ll play again in Milwaukee on Wednesday.

Cade Cunningham’s 27 points, seven assists and six rebounds led the Pistons, who were playing the tail end of a back-to-back.

Holiday scored 13 points in the opening quarter as the Bucks grabbed a 34-23 lead. Milwaukee maintained a double-digit advantage most of the second quarter before an 8-3 Pistons spurt pulled them within 60-52 by halftime.

Saddiq Bey scored six points when Detroit opened the second half with a 9-2 run to cut the Bucks’ lead to 62-61.

Antetokounmpo then went on a personal 8-0 run. A 9-2 Milwaukee spurt midway through the quarter extended its lead to 82-67. Lopez had six points during that stretch.

Detroit cut its deficit to 11, 88-77, by the end of the quarter. Ivey’s three-point play in the first minute of the fourth made it an eight-point game.

The Pistons soon cut it to two at 92-90 with an 8-0 run, capped by a Bogdanovic layup. Holiday prevented Detroit from taking the lead by knocking down his team’s first 3-pointer of the half.

Antetokounmpo made a fadeaway jumper with 2:07 to go for a 105-101 advantage. Ivey answered with a pair of free throws.

After the Bucks failed to score on their next possession, Stewart tied it with a layup.

Holiday responded with a 3-pointer from the wing. Cunningham missed an elbow jumper but Antetokounmpo committed a turnover. Cunningham then missed a long 3-point try and Lopez made two free throws to clinch Milwaukee’s victory.