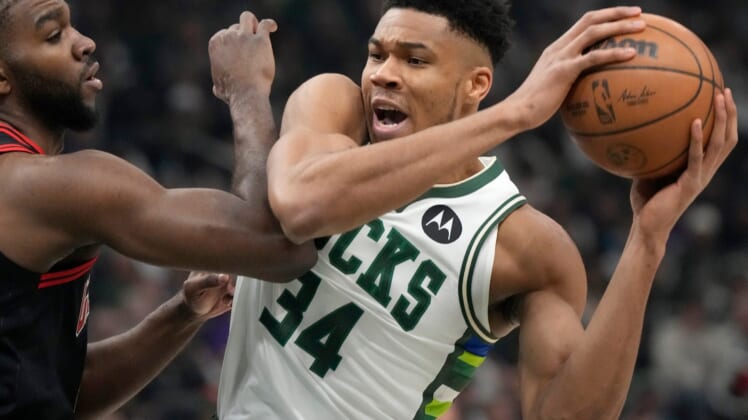 Giannis Antetokounmpo will put his playoff dominance on display again when the Milwaukee Bucks play host to the Chicago Bulls on Wednesday night in Game 2 of their first-round Eastern Conference playoff series.

Dating back to last season’s opening-round playoff matchup with the Heat, the two-time MVP has recorded 19 double-doubles and one triple-double over his last 22 playoff games.

Antetokounmpo has averaged 30.0 points, 13.0 rebounds and 5.0 assists during that span, as Milwaukee has posted a record of 15-7 with their star on the court.

His postseason prowess was on full display Monday night, as Antetokounmpo poured in 27 points and 16 rebounds on 10-of-19 shooting to lead the Bucks to a 93-86 victory in Game 1.

Brook Lopez added 18 points, and Jrue Holiday chipped in 15 to go along with six rebounds and six assists. Reserve Bobby Portis also had a strong showing, providing 10 points and 12 rebounds.

Milwaukee’s supporting cast had to step up in the fourth quarter after Antetokounmpo went to the bench with five fouls and 8:14 remaining. The Bucks held the Bulls to just 15 points over the final 12 minutes on the clock.

“Obviously you want to play at the end, play in the fourth quarter, you know just be in the mix,” Antetokounmpo said. “I’m not extremely frustrated. I know that my team, they’re a great team either with me or without me. They can execute down the stretch.”

The Bucks’ George Hill could miss Wednesday’s contest with an abdominal strain that held him out of Game 1. Jordan Nwora is also listed as day-to-day with a sore back.

However, Grayson Allen is back with the Bucks after missing the final three games of the regular season with a hip injury. The 6-foot-4 guard was held scoreless in Game 1 across 18 minutes.

The Bulls will look to bounce back from the loss, and in order to do so, their stars will have to clean things up on the offensive end.

Chicago’s big three of DeMar DeRozan, Nikola Vucevic and Zach LaVine struggled shooting the ball on Monday, combining to go 21 of 71 (29.6 percent) from the field.

Vucevic paced the Bulls with 24 points and 17 rebounds on 9-of-27 shooting. LaVine supplied 18 points and 10 rebounds, and DeRozan also went for 18 points along with eight rebounds and six assists.

Shots were not falling from deep either, as Chicago went just 7 of 37 (18.9 percent) from 3-point range. It was the Bulls’ worst performance from beyond the arc since Jan. 21 when they shot 18.4 percent from deep in a loss to Milwaukee.

Aside from the offensive struggles, the Bulls’ defense was stout, as they were the first opponent to hold the Bucks under 100 points since Jan. 26.

“We went out there (and) showed it defensively,” DeRozan said. “… You know offensively, I guarantee you we not going to shoot like we shot (Sunday), but games like this you got to be able to rely on your defense to give you opportunity to win.”

Wednesday’s contest marks the 20th all-time playoff meeting between Milwaukee and Chicago. The Bulls have struggled as of late, dropping three of the last four postseason meetings.