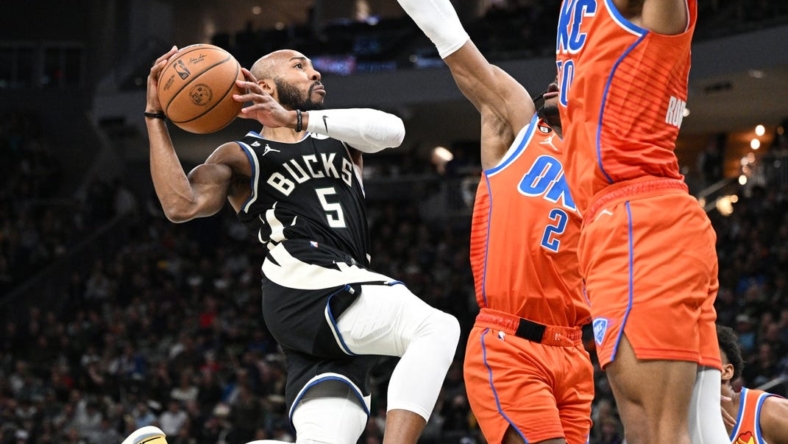 The Milwaukee Bucks beat the Oklahoma City Thunder a few days ago without Giannis Antetokounmpo.

When the Bucks take on the Thunder on Wednesday in Oklahoma City, they might be without another one of their primary pieces.

Jrue Holiday, who played a major role in the Bucks’ 108-94 home win over Oklahoma City on Saturday, is listed as doubtful for Wednesday’s game after spraining his right ankle late in Milwaukee’s loss to Atlanta on Monday.

The loss was the Bucks’ first of the season.

Antetokounmpo, who didn’t play Saturday, is listed as probable with left knee soreness.

Holiday had 10 points, 13 assists and six rebounds in Milwaukee’s win over the Thunder.

While Antetokounmpo and Holiday get plenty of attention, Jevon Carter has played a big role in Milwaukee’s hot start as well.

His defensive effort went a long way toward the Bucks holding Oklahoma City’s Shai Gilgeous-Alexander to a season-low 18 points.

“He just can be a pest and kind of bother people,” Milwaukee coach Mike Budenholzer said. “Gilgeous-Alexander has the ball a lot so to have somebody that kind of embraces having to guard all those screens and get into them, we’re fortunate to have Jevon be able to do that.”

The Thunder trailed by as many as 24 in the third quarter but cut it to 10 in the fourth before Brook Lopez and Holiday helped the Bucks put the game away for good.

“That’s what effort does,” Oklahoma City coach Mark Daigneault said. “When you give effort, the game can turn your way and you can benefit from some chance and you can drum up some plays even in the face of adversity and I thought that’s what happened in the second half.

While Milwaukee is looking to bounce back from its first loss of the season after a 9-0 start, the Thunder are trying to snap a three-game losing streak.

Daigneault said he was embracing the challenge for a young team facing one of the NBA’s best.

“Playing against the best teams is a great opportunity because it’s the most accurate barometer of where you’re at,” Daigneault said. “Against that team, you have to work to score. They make you work. That’s why they’re a great defense.”

Heading into Wednesday’s games, the Bucks are the NBA’s top defense, with a 101.9 defensive rating — the number of points allowed per 100 possessions.

“They score so much in the paint, they drive it so hard, they do a good job of kind of slipping screens and creating driving lanes and just driving it in general and spacing the court with five out,” Budenholzer said.

The Thunder are No. 7 at 108.8 in defensive rating, though during their three-game losing streak Oklahoma City has posted a 113.6, dropping on the list.

Wednesday’s game, the final meeting of the season between the teams, is the first of back-to-back home games for the Thunder. That marks their only two home games in an eight-game stretch.

For Milwaukee, it’s the second in a three-game road trip that began with Monday’s 117-98 loss in Atlanta.