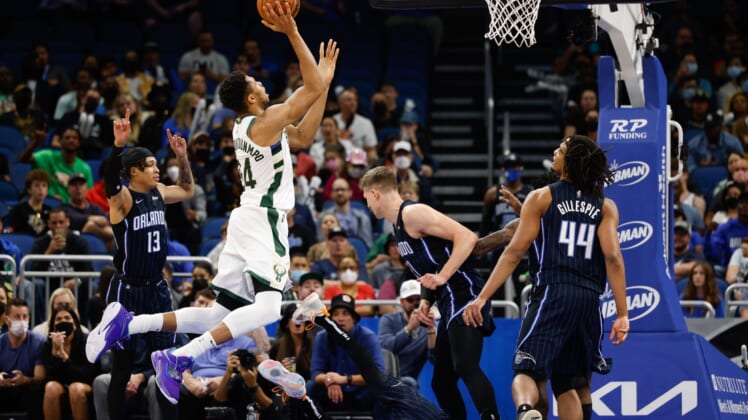 Giannis Antetokounmpo scored 28 points, Khris Middleton added 21 and the visiting Milwaukee Bucks continued their mastery of the Orlando Magic with a 127-110 victory on Tuesday night.

Bobby Portis hit five 3-pointers and scored 19 points for Milwaukee, which has won 10 straight games against Orlando as well as 19 of the last 23 regular-season meetings. Jrue Holiday’s finished with 18 points (12 in the second half) and 10 assists, while Pat Connaughton had 10 points off the bench.

The defending NBA champions also won their fourth in a row and are 10 games above .500 for the first time this season.

Orlando, which dropped to 2-12 at home, has lost three straight games since posting back-to-back wins for the first time this year.

Franz Wagner scored a career-high 38 points, 10 more than his previous best, and his 17th straight game in double figures tied him for the second-longest streak by a Magic rookie. Stanley Roberts (1992) and Jameer Nelson (2005) also had 17-game streaks, while Shaquille O’Neal holds the record of 54 set during the 1992-93 season.

Five different Bucks combined for eight triples during a 31-8 first-half run, giving Milwaukee a 49-26 lead. Milwaukee blitzed the Magic with a 40-point second quarter for a 72-45 halftime advantage.

The Bucks, who entered the game shooting 35.7 percent from 3-point range, went 13-for-24 from beyond the arc in the opening half. Portis made all five of his long-range attempts, while the Bucks had 19 assists on their 26 baskets.

A 19-0 run pulled the Magic within 76-66 in the third quarter, but Milwaukee regrouped to take a 97-82 lead into the final period.

Orlando trailed 115-106 with three minutes remaining, but the Bucks closed the game on a 12-4 run.