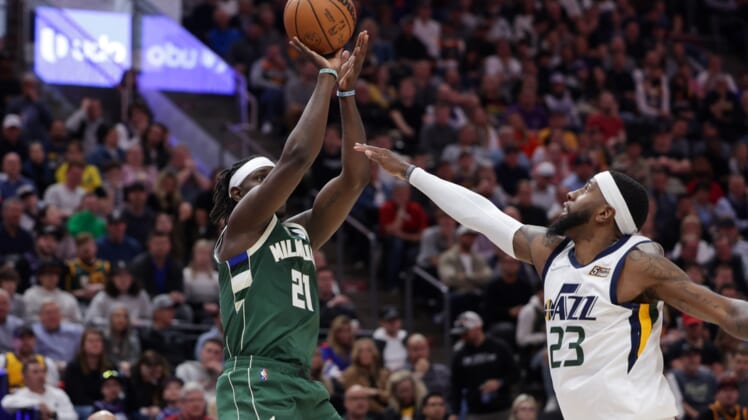 The Milwaukee Bucks will aim to defeat Sacramento for the 12th consecutive time when they visit the Kings on Wednesday night.

Five of those wins have come in Sacramento. The Bucks won this season’s first meeting 133-127 on Jan. 22 in Milwaukee despite two-time MVP Giannis Antetokounmpo being sidelined with right knee soreness.

Antetokounmpo is healthy now and has put together four straight 30-point outings. He is averaging 35.8 points during the stretch after producing 30 points and 15 rebounds in Monday’s 117-111 road win over the Utah Jazz.

Jrue Holiday also stood out with 29 points, seven assists and a season-best five steals while Khris Middleton scored 23 points for the Bucks, who are in second place in the Eastern Conference.

Milwaukee also had center Brook Lopez on the court for the first time since the season opener. Lopez missed 67 games with a back injury before scoring six points in 15 minutes off the bench against the Jazz.

Lopez is in his 14th NBA season — fourth with the Bucks — and averaged 12.3 points last season while helping the team win the NBA title.

“He’s just somebody who’s incredibly valuable to us on both ends of the court,” Milwaukee coach Mike Budenholzer told reporters. “I think he just gives the whole team a real confidence that there’s always somebody there that has their back.”

The Bucks might need all their guards if they hope to slow down red-hot Sacramento point guard De’Aaron Fox.

Fox registered 34 points, six rebounds and six assists in the Kings’ 112-103 home win over the Chicago Bulls on Monday. Fox has topped 30 in four of the past five games and is averaging 35 points during the stretch.

Fox has outings of 44 points (his career high) and 41 while shooting 52 percent or better in four of the five games. He has tallied at least 20 points in 16 consecutive contests.

“De’Aaron is playing so well right now and he’s doing an extremely good job of controlling the game,” Sacramento coach Alvin Gentry said after Monday’s solid win. “Night in and night out, what he is doing for us is amazing. He’s playing as well as anybody in the league if you go back over the last month or so.”

The victory was just the Kings’ third in the past 12 games. Also playing well against Chicago was guard Donte DiVicenzo, who has been with the team for a month after being acquired from the Bucks in a four-team trade.

DiVincenzo’s 15 points were his most in 13 games with the Kings. He also contributed seven rebounds and four assists and helped put the clamps on Bulls star DeMar DeRozan (21 points, 7-of-17 shooting) while playing 35 minutes.

“Confidence is a hell of a thing,” DiVincenzo said afterward. “And I think, not just me, but I’m talking in general from top to bottom, I thought we came out and played with a lot of confidence.”

While with Milwaukee, DiVincenzo helped send Sacramento to a defeat in the earlier meeting as he scored 20 points as the supporting star to Middleton (34 points) and Holiday (26).

Harrison Barnes led the Kings with 29 points in that affair. Fox was sidelined with a left ankle injury.