Bucks aim for another win in heavyweight bout with Warriors 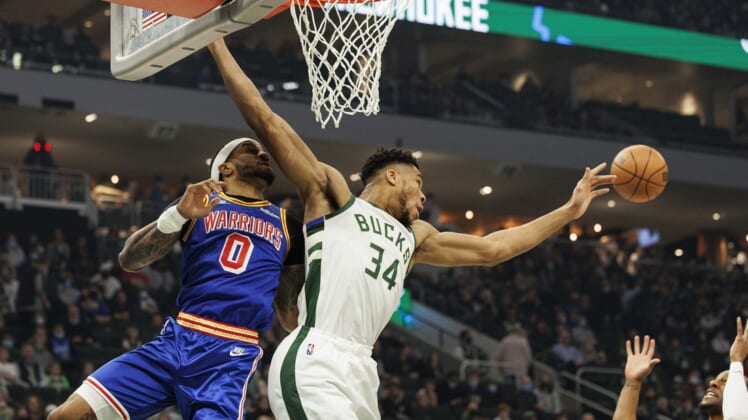 The Milwaukee Bucks and Golden State Warriors each will enter an intriguing stretch of their schedules when they complete their two-game season series in a nationally televised contest in San Francisco on Saturday night.

The Bucks dominated at both ends of the court when shellacking the Warriors 118-99 on Jan. 13 in Milwaukee, but the game wasn’t nearly as close as the final score might indicate.

All five Bucks starters hit at least half of his shots and the team shot 51.2 percent in a game Milwaukee led by as many as 39 points.

The Warriors, meanwhile, were limited to 34.7 percent shooting from the field as just one of their starters — Andrew Wiggins (6 of 11) — made at least half of his shots.

The Bucks were coming off consecutive losses and four defeats in their past five games when the clubs last met. But their form has been far more polished of late, having won six in a row, including wins over the Miami Heat, Chicago Bulls, Phoenix Suns and Atlanta Hawks in that stretch.

But as they continue their pursuit of the Heat for the top spot in the Eastern Conference, the Bucks now embark on a rough nine-game stretch that features a pair of trips, beginning with a four-gamer they open at Golden State.

They also will visit the Utah Jazz, Sacramento Kings and Minnesota Timberwolves in the Western swing.

After a pair of home games, one against fellow Eastern contender Chicago, the Bucks then must endure a truly heavyweight sequence of road games against the Memphis Grizzlies, Philadelphia 76ers and Brooklyn Nets.

The good news for Milwaukee is that it kicks off the stretch with Giannis Antetokounmpo playing at a Most Valuable Player level. He followed up a 13-of-19, 39-point effort Tuesday at Oklahoma City with a 43-point, 12-rebound double-double in a home win Wednesday against the Hawks that had at least one teammate’s jaw dropping.

“That ain’t normal, bro,” Bobby Portis insisted after the game. “The things he does are not normal. Three people on him in the paint and finding a way to go up and dunk the ball. Or just rolling to the goal, jumping over everybody and dunking the ball. And just putting his head down at the top of the key driving, Euro(stepp)ing … I could just keep going on and on. It’s fun to be his teammate, fun to be alongside.”

Antetokounmpo had a triple-double (30 points, 12 rebounds, 11 assists) in the earlier win over the Warriors.

For Golden State, help is on the way in the form of Draymond Green, who won’t face the Bucks.

Green is expected to return from a back injury to face Washington Wizards on Monday; the Boston Celtics, who make their annual San Francisco Bay Area appearance on Wednesday; and the San Antonio Spurs on March 20. Gregg Popovich, the former Warriors assistant, should get a nice reception when his Spurs visit after finally catching Golden State’s legendary Don Nelson atop the NBA coaches’ wins list.

The Warriors, who have struggled of late without Green, entered Friday in a tie with the Grizzlies for second place in the Western Conference, 8 1/2 games behind the Phoenix Suns. They are coming off an encouraging 113-102 win at Denver on Thursday. Stephen Curry had 34 points in the win.

“It was a much-needed win,” Golden State coach Steve Kerr said of a second straight triumph that followed a five-game losing streak. “Hopefully we can put together a little streak here.”

James Wiseman, who made his season debut in the G League on Thursday night, also is expected back during the homestand. He has yet to play an NBA game this season following knee surgery.