Bucks, 76ers meet in clash near top of East standings 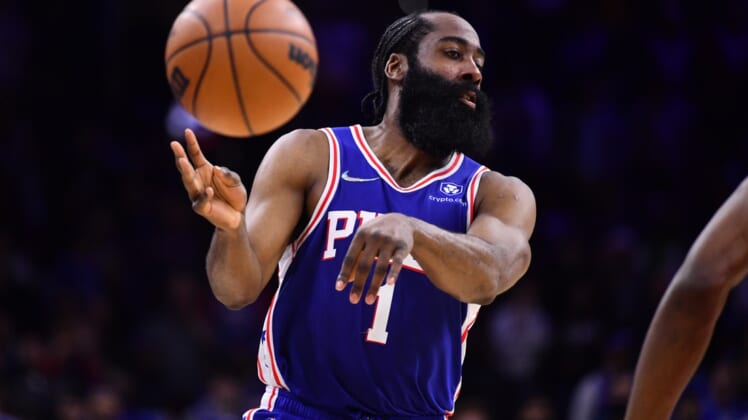 The Philadelphia 76ers will continue to navigate tough teams when they play host to the Milwaukee Bucks on Tuesday night.

The teams enter with identical 46-28 records, tied for third best in the Eastern Conference and just a half game out of first place, entering play Monday.

The Sixers fell 114-104 on the road to the powerhouse Phoenix Suns on Sunday despite a 37-point, 15-rebound performance from MVP candidate Joel Embiid.

But recently acquired All-Star James Harden struggled by going 2 of 11 from the field and scoring 14 points.

“A couple calls that didn’t get called,” Harden said. “A couple of just missed shots. Eleven shots isn’t enough. I’ve got to take more shots and be more aggressive.”

A bigger concern is tempo. The Sixers are at their best when they’re running and getting out in transition.

Too often in recent games, they have been forced to play in a slower, half-court pace.

“The main cause was we played too slow. We got to find a way to get easy baskets,” Embiid said after the loss to the Suns. “… We got to try and get into transition early, get something out of it and (if) we don’t have anything, pull it back out. Whether it’s a post-up or a pick-and-roll and play out of that, but I’ve been feeling that for the last couple of games. We’re just playing too slow. No pace.”

With only eight regular-season games remaining before the playoffs, the Sixers remain in search of their rhythm.

“We have to be a lot sharper with that as we close out these last few games and (get) ready for playoffs for sure,” the Sixers’ Tobias Harris said. “We’re gonna need it to win in the playoffs.”

The Bucks also will look to rebound after a blowout 127-102 loss on the road against the Memphis Grizzlies on Saturday.

Giannis Antetokounmpo led the Bucks with 30 points and 11 rebounds, while Khris Middleton added 16 points and five assists. But their team defense struggled in the rare lopsided defeat, when Grizzlies star Ja Morant didn’t even play.

The Bucks have dealt with a litany of injuries but appear to be as healthy as they’ve been all season.

“Each year has its own unique situations and circumstances,” Bucks coach Mike Budenholzer said. “But I think to have the team as healthy as possible is something that is very important. Layered into healthy is maybe, if possible, having not worn down mentally or physically (players). So sometimes injuries can be a little bit of a silver lining.”

Brook Lopez returned March 14 following a lengthy recovery from back surgery. On Saturday, he had 10 points and six rebounds.

Antetokounmpo, Middleton and Jrue Holiday have been banged up and sat out games recently.

If the Bucks hope to repeat as NBA champion, they’ll need a healthy roster.

“Obviously, you’ve got to start taking care of your body because … there’s a bunch of injuries like lingering, you know?” Antetokounmpo said.

“Like somebody’s knee, ankle, back, hips. You’ve got to start taking care of your body. You don’t want to go into the playoffs having all these things lingering. You want to be 100 percent healthy because once you go into the playoffs … stuff is going to happen there.”