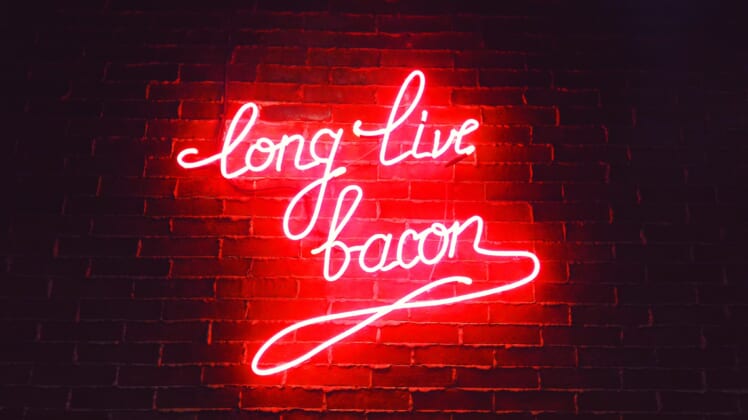 Bacon and college football are two of the most sacred things on this blue planet, and Ohio State Buckeyes fans will be treated to plenty of both this season.

Thanks to the Ohio Pork Council, there is an honest-to-God Bacon Vending Machine being featured at Ohio Stadium this year.

“The Ohio Pork Council is proud to support Ohio State Athletics and could not think of a more fitting location to launch our new Bacon Vending Machine than Ohio Stadium,” said Nathan Schroeder, a pig farmer from Putnam County, Ohio, per elevenwarriors.com. “Thanks to the Bacon Vending Machine, fans can cheer the Buckeyes on to victory with a classic game day favorite – bacon.

“Developed in collaboration with Innovative Vending Solutions, the custom machine features a variety of ready-to-eat bacon for fans to enjoy at an affordable price. The modern machine also features a touch screen interface with educational videos and facts about Ohio’s pig farming community on display – enabling consumers to learn more about responsibly raised pork.”

The Horseshoe featured a Bacon Vending Machine last year for eight days, per the report, and during that time it dispensed more than 275 pounds of bacon to students and fans.

This year, the Bacon Vending Machine is back and better than ever, due in large part to the hard work of Ohio Pork Council junior staffer Meghann Winters, who is also an Ohio State student.

The only thing this vending machine is missing is a beer dispenser.