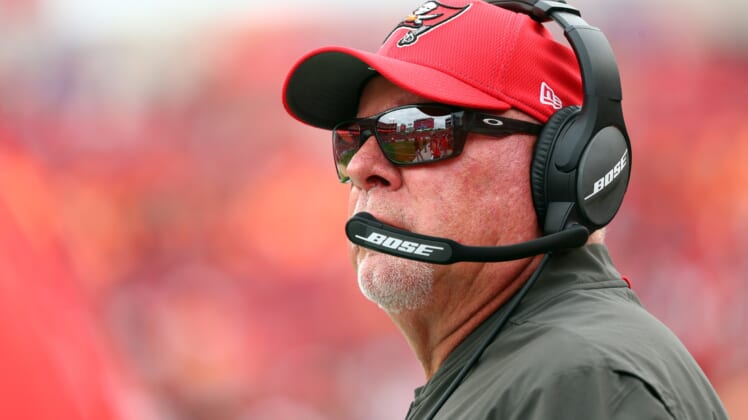 As Tampa Bay Buccaneers head coach Bruce Arians prepares for the 2020 NFL season, much of his focus has been on integrating Tom Brady into the team’s offense. However, one of the NFL’s sharpest coaching minds is also considering taking a unique approach at the quarterback position this season.

Bruce Arians may quarantine a quarterback for upcoming NFL season

The 2020 NFL season is fast approaching and players could report for training camp in just over a month. As the COVID-19 pandemic continues, though, NFL teams are making adjustments to their preparation in a season unlike anything we’ve seen before.

Not only is the NFL facing the possibility of playing in empty stadiums or with reduced crowd sizes, but the league will also need to test players regularly for the coronavirus. As we’ve learned from the NCAA, players will inevitably test positive for COVID-19, which will force them to go into isolation.

During an appearance on former NFL player Chris Long’s podcast, Arians opened up about the potential process of COVID-19 testing and quarantining for NFL teams. He also admitted that he is considering separating the No. 3 quarterback to prevent a disaster scenario.

“That’s one of the things I’ve been pondering the last two or three weeks. As we set the protocols and from what I’m understanding, is that if you test positive, you’re quarantined for two weeks,” Bruce Arians said via Green Light “…But I’ve thought about keeping a third quarterback on the roster out of the room. So, I might have to quarantine a quarterback just in case of a quarantine.”

The rationale makes a lot of sense and it wouldn’t be surprising if the Buccaneers aren’t the only team considering it. We will likely see every team roster three quarterbacks this season due to the COVID-19 pandemic. By separating one of them from the others, it would increase the chance that at least one quarterback is healthy and available to play if the starter tests positive for the coronavirus.

Of course, the Buccaneers will do everything in their power to make sure Brady isn’t exposed to the coronavirus this season. If it happens, though, Arians will likely have a plan to handle it.