Bryson Stott drives in 5 to power Phillies past Braves 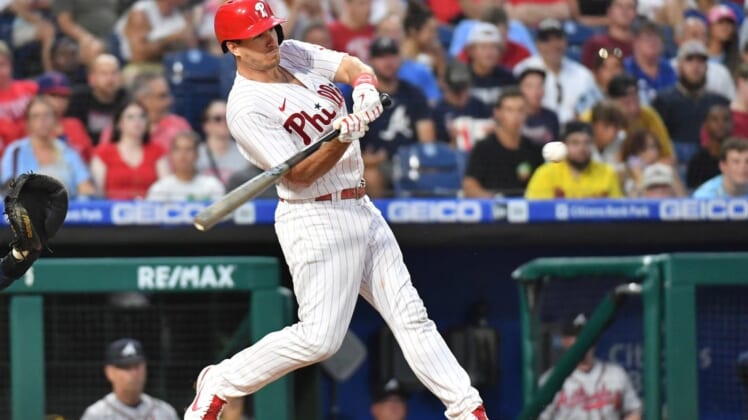 Bryson Stott hit a home run and a double and drove in five runs to lift the host Philadelphia Phillies past the Atlanta Braves 6-4 on Monday.

J.T. Realmuto added an RBI single and Alec Bohm had three hits for the Phillies, who snapped a three-game losing streak.

Phillies starter Ranger Suarez lasted five innings and allowed four hits and three runs, though none were earned. Suarez struck out four and walked one.

Seranthony Dominguez pitched a scoreless ninth inning for his fifth save in six chances.

Marcell Ozuna had three hits and an RBI while Austin Riley doubled twice and extended his hit streak to 17 consecutive games for the Braves.

Braves starter Max Fried tossed six innings and gave up nine hits and three runs to go along with eight strikeouts and no walks. Fried threw 103 pitches, 69 for strikes.

A.J. Minter (4-3), who allowed the three-run homer to Stott in the eighth, took the loss.

The Braves went ahead 2-0 in the second inning when Johan Camargo was charged with a throwing error, allowing both runs to score with the bases loaded. Camargo fielded the ball cleanly at third base but threw wide of Rhys Hoskins at first.

Orlando Arcia then scampered home after a wild pitch by Suarez for a three-run advantage.

In the second, Stott hit a two-run double to right to close within 3-2. The ball appeared to be a routine grounder but took a bad hop and bounced into right.

Realmuto tied the game at 3 with an RBI single to left in the third.

Ozuna hit an RBI infield single with two outs in the sixth for a 4-3 Braves lead.

Bohm and Munoz each singled with two outs in the eighth and Stott connected on a three-run homer off Minter for a 6-4 lead. It was just the second home run allowed by Minter this season.