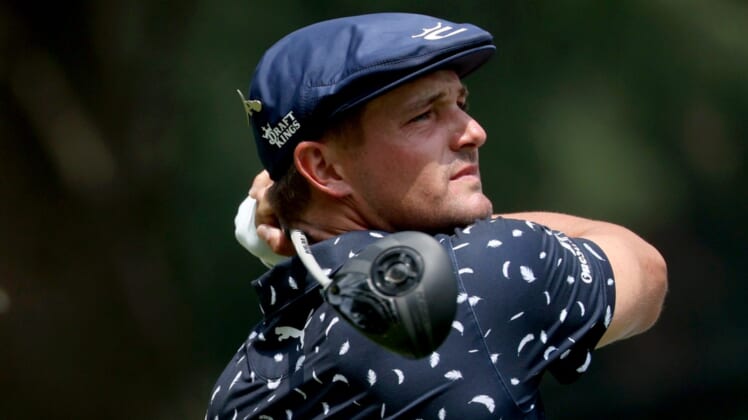 Bryson DeChambeau watches his tee shot of on the par 4, Hole No. 5 during the final round of the World Golf Championships FedEx-St. Jude Invitational on Sunday, August 8, 2021, at TPC Southwind in Memphis, Tenn.Done Jrca8239

Bryson DeChambeau met his match off the tee Friday, getting eliminated from the Professional Long Drivers Association World Championships after advancing to be among the final eight competitors at Mesquite, Nev.

Kyle Berkshire won the event with a 422-yard drive in the two-man final, getting the best of Justin James, who was at 418 yards.

Known for a fitness regimen that has allowed him to be the longest hitter on the PGA Tour, DeChambeau found it was another story while facing long-drive professionals, who have even more club-head speed.

DeChambeau still survived three full days of elimination rounds, making the final eight competitors out of a field of 128.

He compiled enough points in the Round of 16 earlier Friday, including a 416-yard drive, to advance to the final eight.

Competing in two groups of four in the final eight, DeChambeau was eliminated with a top distance of 391 yards. Martin Borgmeier of Germany hit a drive 397 yards and James won the group with a 403-yard blast as both moved into the final four.

Friday was the fourth day of the event that has each player take five sets six five shots each through the final 16 competitors. Starting with the final eight, competitors took six drives, with the longest counting toward their chance to advance.