Like most of the 156-player field at the PGA Championship, Bryson DeChambeau walked off the course feeling like he had gone 10 rounds in the ring with the Ocean Course at Kiawah Island on Thursday.

“It’s diabolical,” DeChambeau said after carding an opening round 72. “You’ve got to be on point every single hole. It’s about mental fortitude and making sure you’re missing it in the right places, if you can.”

Players starting on the back nine as DeChambeau did faced the daunting task of making their turn as part of a nine-hole stretch playing back into the prevailing winds.

“The wind just kicked my butt,” he said. “It’s heat, hot. Just grinding out there, it takes a lot out of you. It’s a lot of work.”

After birdies on two of his first three holes, DeChambeau bogeyed four straight to fall to 2 over for the day. He battled back to even par with three birdies against a lone bogey on his back nine and is five shots back of first-round leader Corey Conners.

DeChambeau was expected to have an advantage with his length at the Ocean Course, which is the longest in major tournament history, even though it played about 200 yards shorter than it could have Thursday. He did average 325 yards off the tee, but hit just more than half of his fairways in regulation and struggled with his short iron play when he did find the short grass. 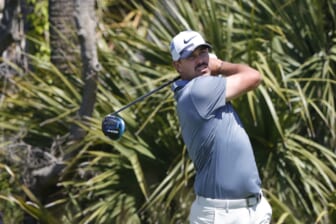 “You have to be able to step up and say, ‘You know what, it doesn’t matter. I’m just going to execute the best shot I could right here.’ That’s what I was able to do on the back nine. “

DeChambeau will play in the afternoon wave on Friday. He said his final nine holes Thursday gave him momentum going into the second round, but he wasn’t planning on putting in one of his famous lengthy post-round sessions on the range.

“I want to get out of here pretty quickly,” he said. “This golf course takes it out of you. This is the most difficult golf course that I’ve played on Tour, and that is a straight-up fact for me.

“That requires a lot of energy.”