Bryce Harper set to rejoin Phils for opener vs. Pirates 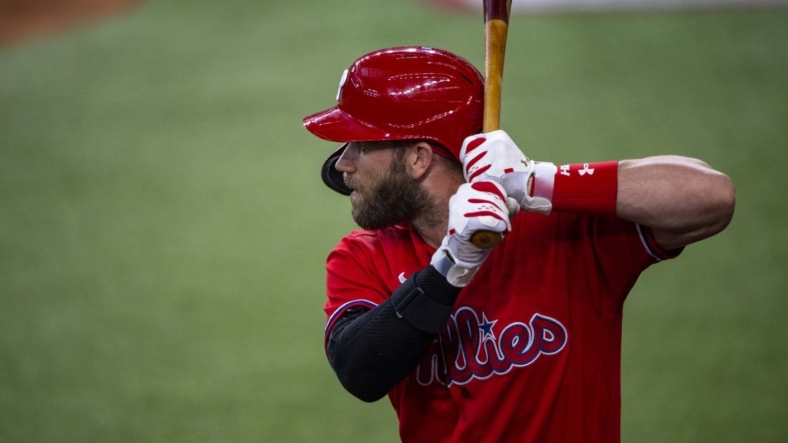 The Philadelphia Phillies had more to celebrate Thursday than just a four-game sweep of the Cincinnati Reds.

The reigning National League Most Valuable Player, Bryce Harper, is scheduled to rejoin the host Phillies in time for their Friday game against the Pittsburgh Pirates.

Harper has been sidelined since his left thumb was broken when he was hit by a pitch on June 25. In two rehab starts for Triple-A Lehigh Valley earlier this week, Harper hit two home runs and added a walk-off double. He went 5-for-8 with six RBIs.

“One, you get a great hitter back,” Phillies interim manager Rob Thomson said, “but he’s also healthy. That’s really important to us. To get another batter in that lineup makes a lot (of difference). Everyone knows how great a hitter he is.”

Harper will rejoin a team that holds a 2 1/2-game lead over the Padres for the second National League wild-card spot. The Milwaukee Brewers are 1 1/2 games behind San Diego in the chase for the league’s final playoff position.

Thomson said of Sosa, “The last couple of times he has played, he’s had an impact on the game, both offensively and defensively.”

Phillies right-hander Zack Wheeler was the original scheduled starter for Friday, but he landed on the injured list due to right forearm tendinitis.

Bailey Falter (1-3, 4.40 ERA) will get the ball instead. In his last outing against the New York Mets, the left-hander tossed six innings and allowed two hits and one run in a win on Saturday.

Falter is 0-0 with a 2.57 ERA in two career games against the Pirates. His lone start vs. Pittsburgh came on July 29, when he fired six innings of two-run ball and struck out eight.

If Falter struggles, the relief corps will be ready since Nola went the distance on Thursday.

“We’ve got a full bullpen,” Thomson said. “Guys got some rest.”

The Pirates got a break on Thursday when they were idle, allowing them to step away from their latest skid. They have lost five games in a row and 11 of their past 13.

Pittsburgh was obliterated 14-2 by the visiting Braves on Wednesday as Atlanta completed a three-game sweep. The Pirates have been beaten by at least 12 runs six times this season.

“This one got out of hand quickly, and then it got out of hand even more,” Pirates manager Derek Shelton said. “I think it’s a good thing we have an off day to get away and be able to flush this one out.”

The 12-run defeat against the Braves was forgetful except for a long single off the wall by rookie Oneil Cruz. In fact, it was the hardest-hit ball since Major League Baseball started measuring exit velocity in 2015.

“I did notice that it was starting to go down and about to hit the fence,” Cruz said. “That’s when I started running even harder. But I did expect it to go out. I didn’t expect it to hit the wall and come right back.”

Cruz is still hitting just .199 with 10 home runs and 30 RBIs, but he appears to be figuring out his swing.

“That ball was scorched,” Shelton said. “It was a good swing by him — a really good swing, really encouraging.”

The Pirates will hand the ball to Bryse Wilson (2-7, 5.74 ERA) on Friday. Wilson is 1-0 with a 5.79 ERA in two career starts against the Phillies, both in 2019. He is coming off a no-decision against the Cincinnati Reds on Aug. 19, when he gave up three runs in seven innings.