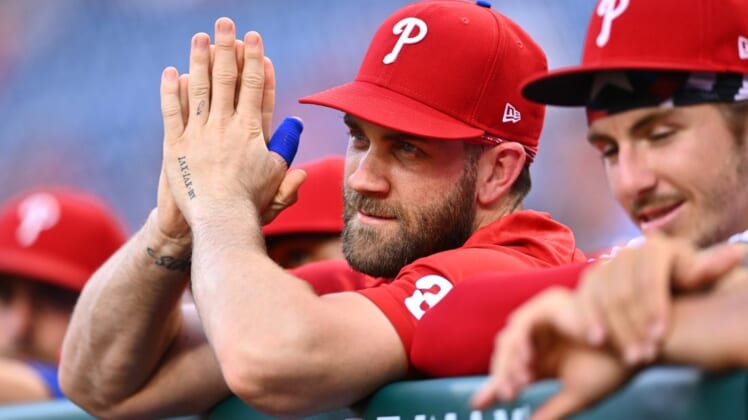 In his first plate appearance for Triple-A Lehigh Valley, Harper homered in the first inning against the visiting Gwinnett Stripers at Allentown, Pa. Harper, serving as the IronPigs’ designated hitter, walked in the third inning, grounded out in the fifth and walked again in the seventh.

Harper broke his left thumb when he was hit by a pitch from the San Diego Padres’ Blake Snell on June 25. He has been on the injured list ever since.

The seven-time All-Star last appeared in the outfield for the Phillies on April 16, spending the next two month as the team’s DH due to a minor tear in the ulnar collateral ligament in his right (throwing) elbow.

Despite his limitations, Harper was still enjoying a strong season at the plate before fracturing his thumb. In 64 major league games this season, Harper is hitting .318 with a .385 on-base percentage, a .599 slugging percentage, 15 homers and 48 RBIs.

Harper, 29, earned his first NL MVP award while with the Washington Nationals in 2015. He was the NL Rookie of the Year in 2012, and he is a two-time Silver Slugger winner.