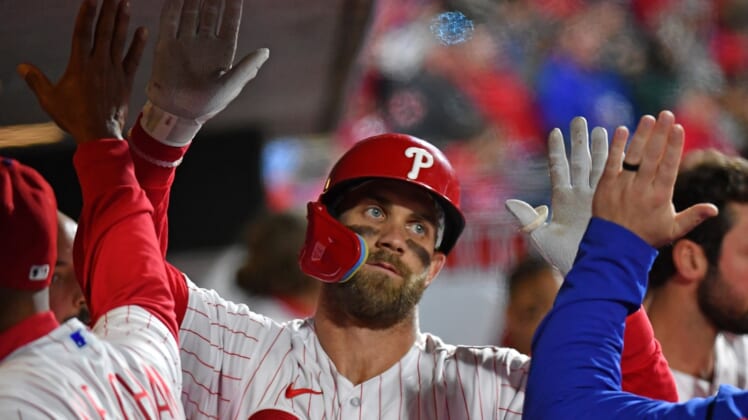 Bryce Harper had a solo home run, a sacrifice fly and drove in two runs and Kyle Schwarber doubled and knocked in two runs for the host Philadelphia Phillies in an 8-2 victory over the Colorado Rockies on Monday night.

Rhys Hoskins added three hits and J.T. Realmuto had an RBI double and a single for the Phillies, who snapped a two-game losing streak.

Phillies starter Kyle Gibson (2-1) tossed 5 2/3 innings and gave up three hits and two runs to go along with four strikeouts and two walks.

Connor Joe and Randal Grichuk each homered for the Rockies, who had won two straight entering this series.

The Rockies quickly went ahead 1-0 when Joe homered to left field on the first pitch to lead off the game.

The Phillies loaded the bases with two outs in the bottom of the first, but Schwarber struck out swinging to end the threat.

Grichuk launched a solo homer for a 2-0 advantage to open the second and extended his hitting streak to 10 games.

In the third, Realmuto ripped an RBI double off the wall in left to close the Phillies within 2-1. Schwarber followed with a fly ball to right that dropped between Grichuk and Charlie Blackmon. Two runs scored and the Phillies took a 3-2 advantage.

Colorado had runners at first and second with one out in the fifth, but Jose Iglesias grounded into a double play.

Harper hit a 417-foot solo homer to center to open the bottom of the fifth for a 4-2 Phillies lead.

After putting runners on first and second again, Colorado’s Brendan Rodgers grounded into a double play to end the seventh.

Harper added an RBI sacrifice fly in the seventh to score Jean Segura, and Hoskins also scored on a wild pitch for a 6-2 advantage. Alec Bohm was soon credited with a fielder’s choice and two runs scored for a six-run lead.