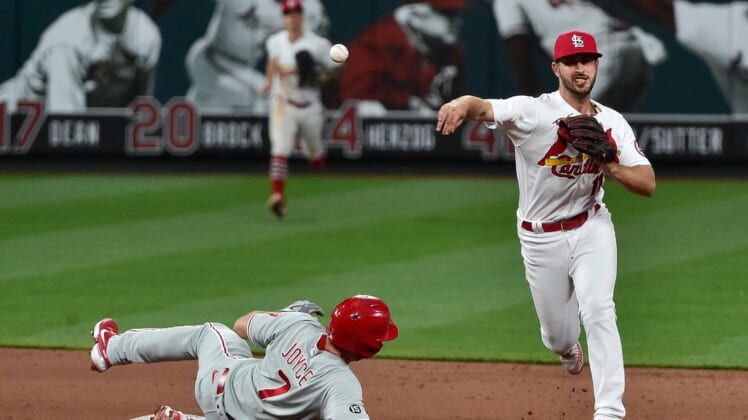 Harper exited the game in the sixth inning after Cardinals reliever Genesis Cabrera hit him with a 97 mph pitch. Harper was bloodied, but he left the field under his own power.

Cabrera hit Didi Gregorius in the back of his ribcage with his next pitch, which prompted the umpires to warn both teams. Phillies manager Joe Girardi protested vigorously and was ejected.

Kintzler tossed 1 2/3 scoreless innings. Hector Neris, the sixth Phillies pitcher, retired the Cardinals in order in the ninth to earn his fifth save.

Cabrera (0-1), who didn’t retire any of the three batters he faced in relief, took the loss. St. Louis’ Johan Oviedo allowed three runs on three hits and two walks over five innings in his first start of the season. Oviedo fanned seven.

Tyler O’Neill had three hits, including a two-run homer, and a stolen base for the Cardinals. Paul Goldschmidt also homered, and Tommy Edman had two hits.

The Phillies took a 1-0 lead in the second inning. Gregorius led off with a double into the right-center-field alley, and Andrew Knapp eventually drove him home with a single into left field.

The Cardinals answered in their half of the inning when Paul DeJong ahead of O’Neill’s homer.

Goldschmidt made it 3-1 in the third inning with his blast over the center field wall. Miller tied the game 3-3 with his two-run homer in the fifth.

The Phillies took a 4-3 lead the hard way in the sixth inning. After the two hit batters, McCutchen delivered an RBI single, ending Cabrera’s night.

Philadelphia pinch hitter Alec Bohm hit a leadoff double in the seventh. Miller walked, and one out later, Matt Joyce walked to load the bases.